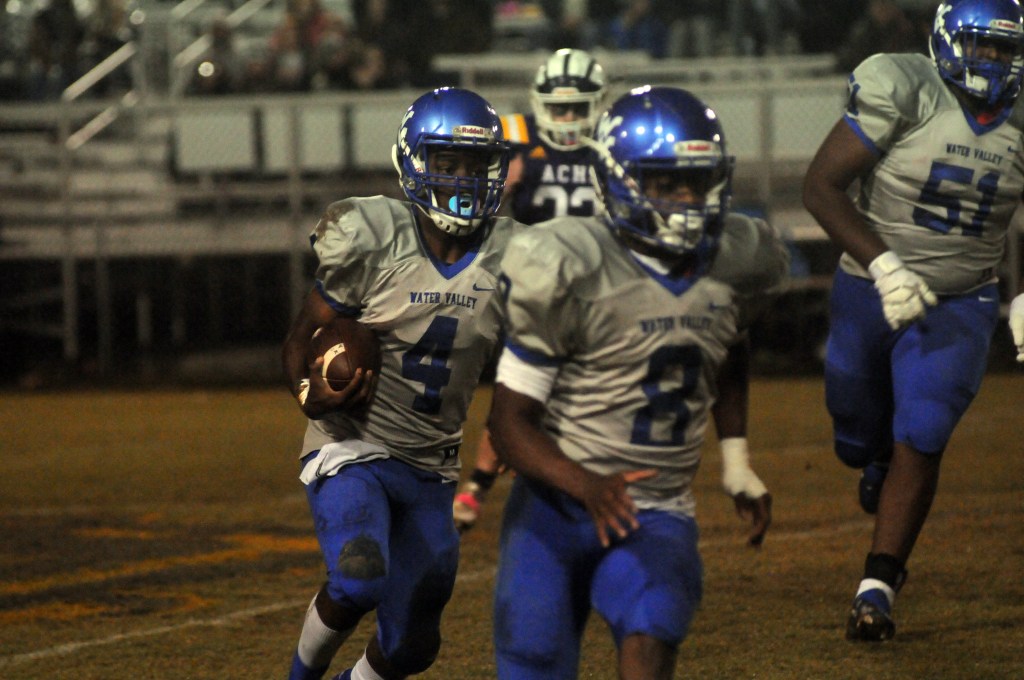 GLEN — Water Valley had one mission on Thursday — take care of business.

The Blue Devils did just that in their 42-0 victory over Alcorn Central at Alcorn Central High School to close out the regular season, securing the No. 2 seed out of Region 1-3A in the process.

With a short week and the elements not ideal as a storm moved through north Mississippi all Thursday afternoon and evening, Water Valley (6-3, 3-1 1-3A) responded with a dominant first half effort.

“Some of these games this is what you have to do,” said Water Valley head coach Brad Embry. “Tough weather conditions and (we) somewhat handled it on everything except punt. Punt team we didn’t handle it. We’re going to have to work on that.”

Wet conditions resulted in slippery footballs that led to high snaps by the Blue Devils on offense and special teams.

Once the players adjusted to the weather and punted on the first drive, quarterback CJ Telford and running back Jaden Morgan took the game over the first half. Morgan scored four touchdowns, all rushing while Telford added a rushing touchdown of his own.

On three straight possessions, the Blue Devils scored on the first play of the drive. Morgan scored on runs of 14, 35 and 39 and two yards while Telford scored on a 30-yard run. Morgan finished with 131 yards on nine carries and Telford had 49 yards on four carries.

Brayden Buford also had a rushing touchdown off a 34-yard run.

“When it’s that easy it means that everybody was blocking and so forth,” Embry said on the success of his offense early.

With an extra day to rest and prepare for the start of the 3A playoffs next week, Water Valley will host a first round game due to locking up a top-two seed out of the region.

The Blue devils will host the loser of Aberdeen and Noxubee County, who do not play until Friday, on Nov. 5 at 7 p.m. at Bobby Clark Field.

“We got to use this week to get ready,” Embry said. “Now’s the third season and that’s what we’re supposed to be getting ready for at Water Valley. We just need to continue to improve, I know I said that and we have gotten better at things. We just need to keep working on it.”