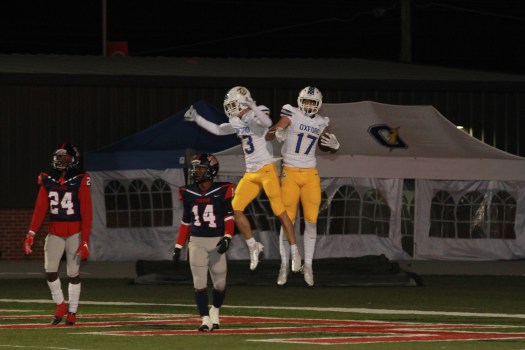 The Oxford Chargers came into tonight’s game with one thing on their mind and that was to advance in the playoffs. They were able to accomplish just that on a cold night in Batesville against the South Panola Tigers. Oxford came into the first round of the 6A playoffs looking to rebound after a tough loss against Madison Central and they made sure that they would be able to move the ball against South Panola’s defense.

On the first drive of the game, Senior Quarterback, Michael Harvey, would find Jake Harper for a 43 yard pass to set their offense in gear as they would score a touchdown on their first three drives of the football game. Not only were the Chargers putting points on the board, but their defense was able to get stops and eliminate running opportunities for South Panola. The Chargers looked like they couldn’t be stopped as they would lead 21-0 at the end of the first quarter.

The defense would continue to shine for the Chargers as they had to cause a fumble on the first play of the second quarter that was recovered by Senior Linebacker, Keegan Wifawn. South Panola would soon be able to put points on the board in their next possession though as Junior Quarterback, David Hubbard, found Ethan Johnson for a 66 yard touchdown. However, the Chargers would soon answer as Junior running back, Roman Gregory, was able to find a hole and run for a 33 yard touchdown. The Chargers would end up having a 28-7 lead at halftime.

South Panola would soon start cutting back into the game as Hubbard would find John Blockman for a 34 yard pass and would later find the end zone for himself for three yards away and would chop away at Oxford’s lead at a score of 28-21 early in the fourth quarter. South Panola would then force Oxford to punt and would drive down the field which led to a seven yard rushing touchdown by Junior running back, Dee Perteet and would tie the game for the Tigers.

Oxford would quickly respond as Harvey would find Cashe Shows for a 70 yard touchdown to give Oxford back the lead and a late interception by Senior defensive back, Elijah Wadley would help seal the deal for the Chargers as they would win a tough one in Oxford by a score of 35-28 to advance in the next round of the playoffs. Oxford will travel to play Madison Central next week.