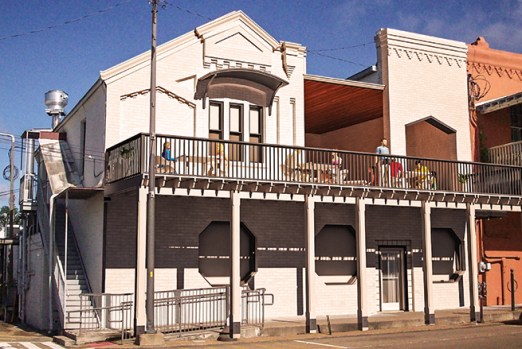 A rendering of the New Orleans-inspired restaurant that chef John Currence is planning to open at 208 South Lamar Boulevard. 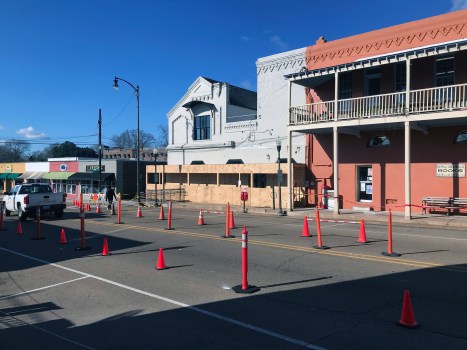 Structural concerns discovered during a renovation project at 208 South Lamar Boulevard caused the closure of the sidewalk on the west side of the street as well as lane closures. The Courthouse Square Preservation Commission will hold an emergency meeting on Friday morning to discuss the building's future. (Jake Thompson/Oxford Eagle) 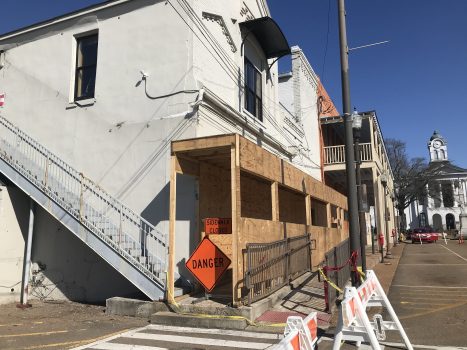 The Courthouse Historic Preservation Commission approved a request to demolish the building at 208 South Lamar on Friday, Feb. 28, 2020. Structural issues were discovered by city building officials earlier in the week, prompting the closure of the sidewalk and traffic lanes on South Lamar Boulevard. (Jake Thompson/Oxford Eagle) 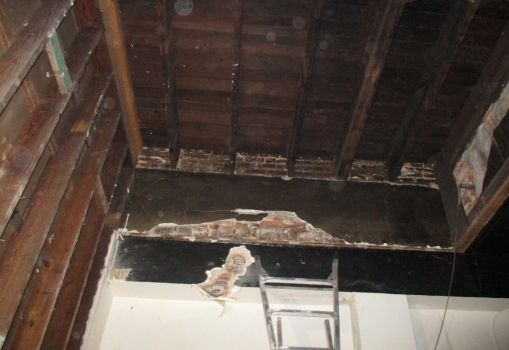 A photo of the deteriorated bricks inside the building at 208 South Lamar was show during the special meeting on Friday. (Chris Carter/Oxford building official) 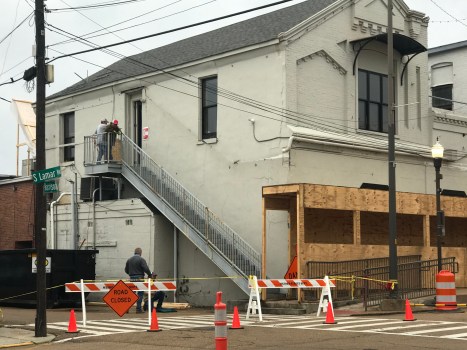 Workers begin demolishing the second floor of the building located at 208 South Lamar. The building was deemed unsafe by city officials last week, prompting the closure of the sidewalks and streets on South Lamar Boulevard.  (Photo by Jake Thompson | Oxford Eagle)

Plans and development for the 208 South Lamar property have once again come to a halt after the Oxford Planning Commission denied the applicant, West Jackson, LLC, a variance due to lack of plans for stormwater retention with two commissioners voting in favor of the approval and four against.

The commission previously tabled the request for a variance in February after commissioners expressed that design plans showed a lack of effort to find a way to detent or control water from the site. The architect Corey Alger of Alger Design Studios stated to commissioners that the issue with placing a stormwater detention system on the property lay in the structure of the city’s Square, not with the planners.

According to Alger’s report, the site does not have access to storm sewer inlets or detentions and the nearest storm exiting inlet is 160 feet away from the property. In addition, the underground utilities located on the two public streets adjacent to the building make it difficult to navigate a stormwater pipe through the utilities to tie into the nearest inlet.

However, Alger and other designers worked to provide the commission with updated drawings that indicate rooftop detention upon the commission’s request.

Design plans show the team has proposed stormwater management by utilizing a portion of the third-floor roof area as a detention basin, however, the design is limited to less than the overall coverage of the site’s footprint to comply with land development codes. It also limits the impervious area created by the overall building footprint that can be captured and detained by the third-floor’s detention basin to approximately 50%. The rest of the water runoff will be uncaptured.

Though the design plan does not accommodate 100% of the water runoff, Project Manager Joey Moore of Williams Engineering Consultants said the current design plan is detaining 44% more stormwater than the original 208 S Lamar property.

“We’re trying not to use the second floor with the porches,” said Moore. “So, we have the roof up there where there will be no public access to it and that’s what we’re using for storage. We’ve got it shrunk down, as far the outflow, as small as we can get it but it’s really the best we can do in this situation, I believe.”

Despite, the architects and planning teams adjustments, Planning Commission Chairman J.R. Rigby stated the team had time since the building’s demolition in 2020 and options open in order to comply with the city’s Stormwater Ordinance.

“From March 2020 to February of 2022, [architects] had a year and 11 months to come up with a building design that would meet the Stormwater Code,” said Rigby. “You brought us no design for stormwater last month and this month the design only covers half the footprint of the building and the design of the building is a stumbling point.”

The commission chairman proposed for the team to explore putting a pump in a below grade storage area, but both Alger and Moore disagreed with the idea from a professional standpoint. When a power outage occurs during a storm, the pumps will fail to work and they will inevitably flood.

“I feel like we asked them to come up with a solution and we had a long discussion on a separate project with Mr. Howorth who I think eloquently said part of the problem is around the Square,” said Commissioner Kirk Milan. “I think they’ve tried to meet us with something to resolve the stormwater issue as best we can around the Square.”

“I agree that they’ve provided something that does some stormwater management, but this is a square property on basically a flat parcel,” said Rigby. “If this has encumbrances that justify a variance, there is no justification for stormwater on the Square. I don’t think that’s the precedent that we want to set. If there’s an issue with the code, we can take that up but I don’t think this is the case to change that code.”

Rigby motioned the planning commission members to vote for the approval of a variance request gaining to votes in favor from Milan and Commissioner David Spragins. Commissioners Rigby, Harry Alexander, Joseph Murphy and Michael Johnson voted against ultimately denying the request.