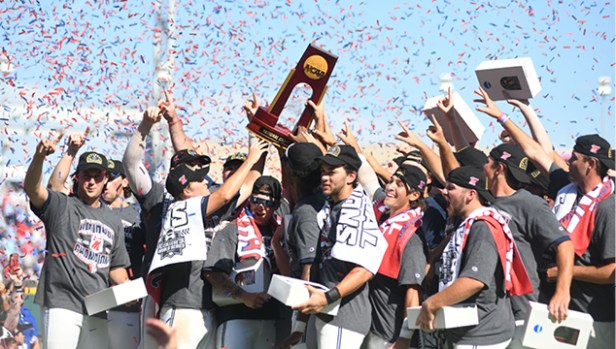 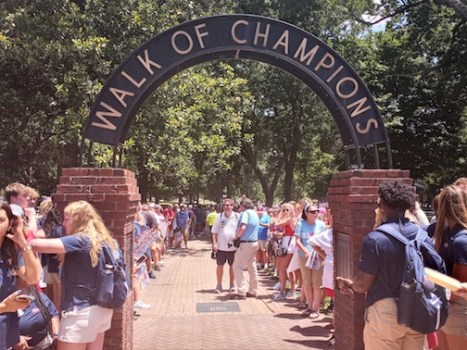 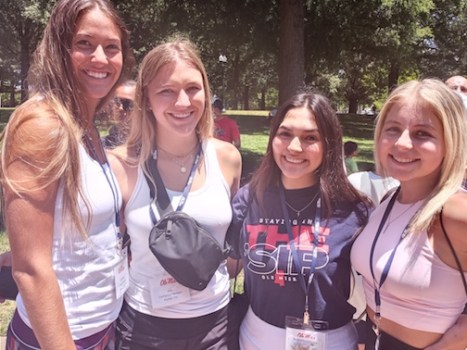 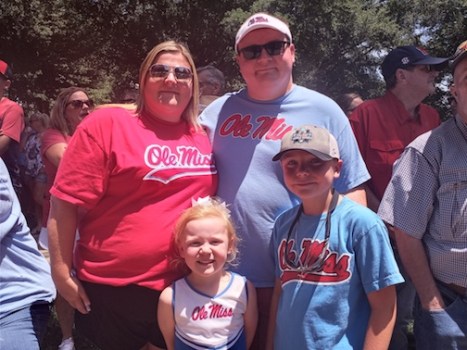 (Top) Paige and Chris Russell of New Albany with (bottom) their children Lucy and Whit at the Walk of Champions to celebrate the Ole Miss Baseball team's 2022 NCAA Championship win.

Ole Miss baseball team returned home from Omaha, Nebraska, and immediately went to celebrate their national championship win at the University of Mississippi’s Walk of Champions.

The Rebels’ baseball team defeated Oklahoma 10-3 and 4-2 in back-to-back games in the College World Series, which not only garnered them the trophy but recognition as the team’s first national championship in program history and the first title for Ole Miss in any major sport.

The 2022 NCAA Baseball National Champions received a very enthusiastic welcome home from a long line of Ole Miss fans who have been waiting for this moment for years.

Many Ole Miss sports enthusiasts like long-time fan Paige Russell have been awaiting this moment for a long time. She and her husband, Chris, and their two kids Whit and Lucy traveled from New Albany to be present for the baseball team’s arrival.

“We’re so excited and pumped up that the Rebels pulled out the win,” said Paige. “It’s the first in history and I wish they’d build a statue of the whole team.”

From their home, the Russell family witnessed the Oklahoma v. Ole Miss games and the team’s historic win, which was met with tears of joy.

“We cried,” she said. “We cried and cried over and over again happy tears. We screamed and yelled.”

Paige said she has been an Ole Miss fan “since birth” and that the love for the school and team is being passed down to her kids.

“My family is Ole Miss fans and we came when I was little to games and I’ve been wearing red and blue my whole life,” Paige said. “Whit thinks that he wants to go [to Ole Miss] one day.”

Whit has two goals in mind for his future.

“Tim is a really big role model and I’m really proud of him,” said Paige. “He expressed his love for God. That’s something really important to us and it’s really good for our son to see such a positive role model.”

The NCAA champions are also seeing love from newcomers to Ole Miss.

Incoming University of Mississippi freshman Gabby Magee was attending summer orientation with her friends when she heard about the celebration at the Walk of Champions. For her, it’s a great start to her college career.

“I absolutely love the fact that they just won the championship,” said Magee. “It makes me want to come to Ole Miss and be a part of the community so much more and it gets me so excited for the next four years. It makes the community feel like it’s together. It’s just a great moment for all of us.”

Magee said she’s happy that she chose to come to Ole Miss and that today’s celebration was a highlight.

“You get so immersed and it gets you ready,” she said. “This is what I’ll be expecting for the four years— the community, the athletics, the feel, the vibes. It’s just a great energy.”