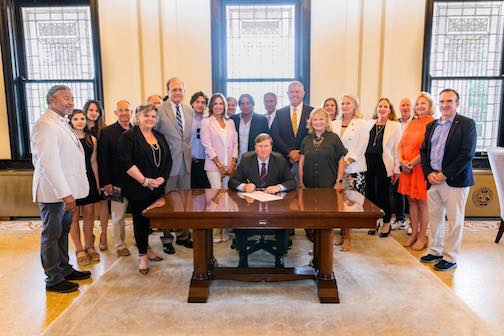 Several new laws take effect in Mississippi on Friday, July 1, which is also the first day of the new state budget year.

In the new budget year, starting salaries for teachers and teachers’ assistants and salaries throughout their career will be more competitive with other neighboring states.

The total raise accumulates to $246 million.

Mississippi will reduce its income tax over four years with the largest and fastest tax cut in state history.

In the following three years, the 5% bracket will be reduced to 4% flat rate, costing $339.1 million for a total elimination of $524.1 million in recurring dollars from the state budget.

Once the tax cut is fully phased in, Mississippi’s income tax rate will be the 6th lowest among the 43 states with an income tax.

Senate Bill 2113 will prohibit “Critical Race Theory,” but the main text of the bill does not mention or define the theory, and many supporters of the bill also have said they cannot define it.

Critical race theory is an interdisciplinary movement which originated among legal and civil rights scholars. It attempts to link racial inequality with various social, educational, legal and criminal justice outcomes, both historically and in modern contexts.

The bill says no school, community college or university could teach that any “sex, race, ethnicity, religion or national origin is inherently superior or inferior or that individuals should be adversely treated based on such characteristics.”

It further states, “no distinction or classification of students shall be made on account of race other than the required collection or reporting of demographic information.”

State Superintendent of Education Carey Wright said critical race theory is not taught in Mississippi schools. The University of Mississippi law school offers an elective class on the theory.

The law is named after Parker Rodenbaugh, a former Madison Central High School and Mississippi State University student who died in 2014 after taking a synthetic drug laced with fentanyl. The man who supplied Rodenbaugh with the drugs that killed him was initially convicted of drug trafficking and second-degree murder, but the murder conviction was later dismissed during appeals.

The new law specifically targets the sale of fentanyl. A person charged with drug distribution of fentanyl could face 20 years to life in prison if the sale directly results in an overdose death. Drug users who share drugs resulting in an overdose or those who seek medical help for people who overdose can’t be charged under the law.

The city of Oxford has experienced an increase in overdoses that are linked to fentanyl. In November of 2021, 10 people died of an overdose and 16 survived. In April that same year, the OPD reported that 10 overdoses had occurred in the six months prior.

Mississippi will become the final state to enact a law requiring equal pay for equal work by women and men on July 1.

With this law, employers will be prohibited from paying an employee at a rate less than the rate at which an employee of the opposite sex in the same establishment is paid for equal work on a job— the performance of which requires equal skill, education, effort and responsibility, and which is performed under similar working conditions.

However, critics said the new law is harmful because it will allow an employer to pay a woman less than a man based on the pay history that workers bring into new jobs.

The equal pay law only applies to employers with more than five employees and full-time workers.

House Bill 1509 prohibits any government entity, including public colleges and universities from requiring vaccination against COVID-19.

Health care facilities are exempt from the law if a vaccine mandate is recommended or required by the Centers for Disease Control and Prevention, or in order to receive Medicare and Medicaid funding.

A new law designates “One Mississippi,” by country music singer-songwriter Steve Azar, as one new state song. It also creates a committee to recommend additional state songs from various genres. The state is ditching “Go, Mississippi,” which had been the state song since 1962. It uses the tune of “Roll With Ross,” the 1959 campaign jingle of segregationist Gov. Ross Barnett.

“Roll With Ross” included the lyrics, “For segregation, 100%. He’s not a moderate, like some of the gents.”

Barnett unsuccessfully resisted integration of the University of Mississippi in 1962, and legislators that year adopted a state song setting new words to his campaign ditty: “Go, Mississippi, keep rolling along. Go, Mississippi, you cannot go wrong.”

Some legislators have quietly sought a new song in recent years, saying the Barnett connection is an embarrassing relic of the bad old days.

The effort gained momentum when Republican House Speaker Philip Gunn opened this year’s legislative session by showing a video of “One Mississippi,” composed by Azar for the state’s 2017 bicentennial celebration.

The bill will not only allow “One Mississippi” to replace the Barnett-linked song, but it would also create a committee to recommend that legislators designate additional state songs later. Tennessee is among states with multiple official songs.