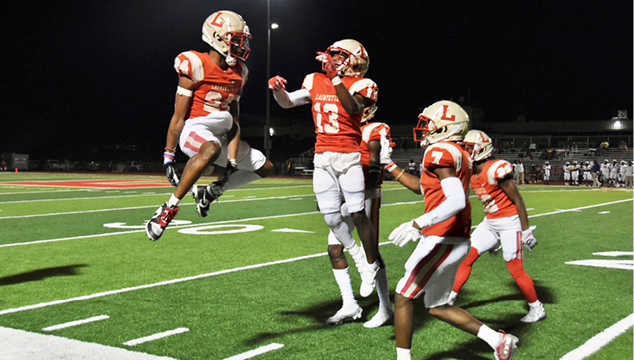 Lafayette's Emmanuel Wadlington (24) celebrates with teammates after recovering a fumble on a kickoff in the second quarter of the Commodores' 45-13 victory over Columbus on Friday. (Casey Osburg/CMG)

That’s how long it took Lafayette to take care of business against Columbus on Friday.

The Commodores (3-4, 2-1 Region 1-5A) battled to a scoreless tie with the Falcons through the end of the first quarter before exploding for 28 points in the first three-plus minutes of action in the second as they beat the brakes off their district rival in the period en route to a 45-13 victory.

First, running back Jay Reed found paydirt on a five-yard touchdown rush to break the deadlock 30 seconds into the quarter.

Then, quarterback Charlie Fair connected with receiver Damariun Gipson for a 42-yard touchdown pass to extend the lead just over a minute later.

He followed that up moments later with another touchdown pass—this time to junior Makyi Reed-Jones who took it in from 15 yards out to give the ‘Dores a three-score advantage.

After Emmanuel Wadlington recovered a fumble on the ensuing kickoff, Reed found the end zone for the second time in the quarter as he fell into the end zone from a yard out to push the lead to 28-0.

The Falcons could not match Lafayette’s offensive explosion as the ‘Dores continued to pile it on with two more touchdowns in the quarter to jump out to a 42-7 at the half.

“I thought special teams were a huge part of that too but our offense kind of opened it up—our offensive staff did a great job and our playmakers on the perimeter did a good job,” said head coach Michael Fair. “We’re getting to the point offensively where guys are having to make decisions on ‘do we want to stack the box and try to stop (Reed) or do we want to go out and cover (Reed-Jones, Gipson and Jmiere Jones)?'”

Lafayette took a bend-but-don’t-break approach against the Falcons’ deadly rushing attack—conceding plenty of yards on the ground but standing strong in the red zone to keep Columbus out of the end zone.

“We talk about it all the time with our defensive staff, we want to defend the entire field,” Fair said. “We practice like that, we put our guys in tough situations like that in practice on the goal line and just reiterate to them that we need to make them go the entire length of the field.”

The ‘Dores cruised to a victory in the second half as a few long drives chewed up the running clock before each team added a consolation score in the final minutes.

The blowout was the second straight convincing win for Lafayette after the Commodores started the season 1-4, and provided a much-needed boost for a team with little room for error down the stretch.

The ‘Dores will be back in action next week as they travel to Columbus to take on New Hope at 7 p.m.