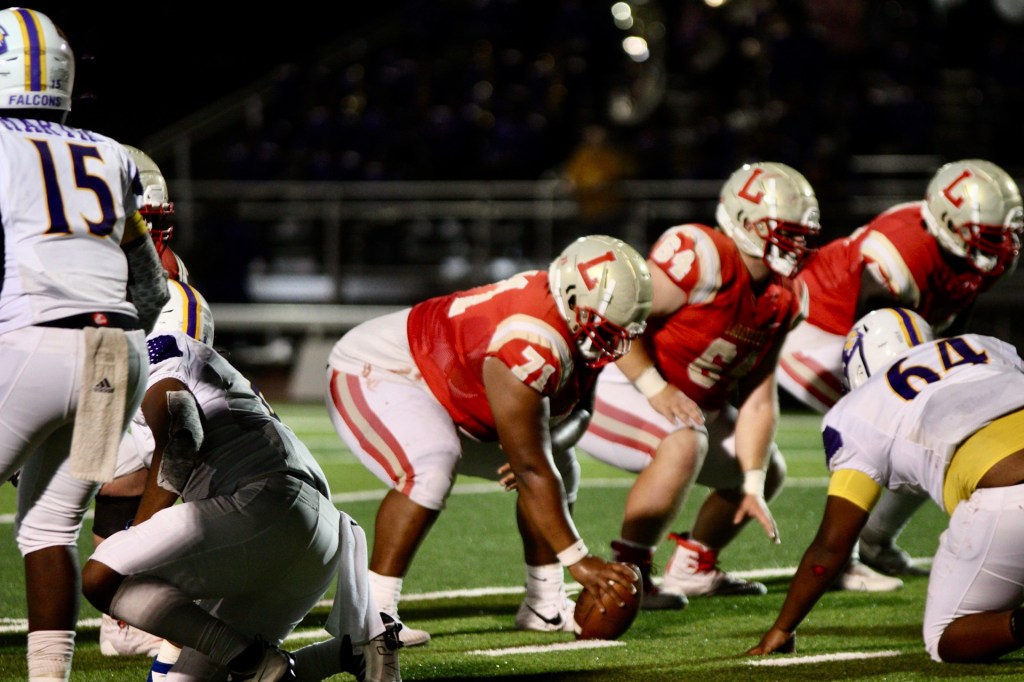 Lafayette's Trey Johnson (71) and Acy Patton (64) line up against Columbus during the Commodores' 45-13 win over the Falcons at William L. Buford Stadium in Oxford on Friday, Oct. 7. (Claire Anne Pugh/CMG)

Lafayette is finally starting to put things together.

The Commodores (4-4, 3-1 Region 1-5A) have won three straight games following a 1-4 start to the season, and head coach Michael Fair says the improved play of his team’s offensive line has been the driving force behind their quick turnaround.

“It was trial by fire at the beginning of the year,” Fair said. “I mean our opponents that we were facing were so talented but the pieces have just kind of fallen in place and I think they get a little more comfortable every game.”

The young offensive line struggled early in the season as they faced off against four consecutive 6A opponents before taking on defending 5A champion West Point.

Lafayette knew they needed to make a switch, so they pulled senior Trey Johnson from the defensive line and made him the starting center. The move gave the Commodores more size on the offensive line and helped solidify the group after their early struggles.

“The offensive line is—it’s hard to describe. It’s a group within a group and those guys have to be able to trust each other and know what the guy next to him is doing,” Fair said. “They have to work together like no other group on the football field and I think those guys are starting to gel. So for those guys to start gelling—it’s the right time of the year for that.”

The Commodores’ offensive line put together perhaps their best performance as a group all season on Friday against New Hope as they carved gaping holes in the Trojans’ defense that allowed senior running back Jay Reed to break loose for 157 yards.

Fair said he was especially impressed with the group’s performance in the second half, where they controlled the line of scrimmage and got to the second level of the defense to create plenty of running room.

“We were able to really control the line of scrimmage from an offensive line standpoint, which was huge in the second half,” Fair said. “I just think every snap they take they get a little bit better and I thought the second half of that game the other night was just a huge stepping stone for them to continue to gel, and continue to get better and build some confidence because we’re going to need them down the stretch.”

The O-line will need to be on top of their game this week as the Commodores welcome a crappy Cleveland Central team to town for their final home game of the year before heading on the road for matchups with Greenville and Lake Cormorant to close the regular season.

The Wolves (3-5, 1-3 Region 1-5A) are coming off a 28-19 loss to Columbus at home last week but have a talented front seven on the defensive side of the ball that excels at getting into the backfield and disrupting plays before they can develop.

“They’re very active, the front seven is very active. They play a lot of man-to-man on the back end because they can—they’ve got some athletic guys so they’re a very difficult team to prepare for,” Fair said.

Lafayette will kick things off against the Wolves at 7:00 p.m. on Friday at William L. Buford stadium.