‘It’s in our hands’: Oxford faces Madison Central with playoff berth in balance 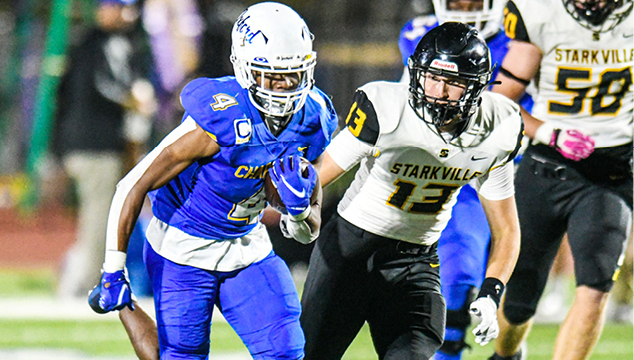 It all comes down to this.

Oxford football puts their four-year playoff streak on the line this week when they host Madison Central in their final regular-season game of the year on Thursday.

The Chargers (5-4, 3-3 Region 2-6A) face a do-or-die scenario needing a win to secure a playoff spot, but face a difficult task ahead of them with a talented Madison Central squad coming to town.

The Jaguars (6-3, 4-2 Region 2-6A) clinched a playoff berth last week with a 42-0 win over Murrah at home, and now look to play spoiler against an Oxford team desperate for a victory.

Cutcliffe said the key to the game will be how well his team is able to execute their gameplan against such a fundamentally sound unit.

The Chargers enter Thursday’s contest with renewed vigor following a 30-7 beatdown of Grenada on the road in which their defense kept a relentless rushing attack in check throughout the night.

Cutcliffe has stressed throughout the season that his team needs to win the battle of explosive plays, and said their work in that area is what led them to a victory last week.

Oxford will need to execute just as well this week as they face off against a high-flying Jaguar offense led by three-star quarterback Vic Sutton.

“Madison is very balanced offensively, that’s one of their strong suits. Whether Sutton’s at quarterback, or Jake Norris plays a lot of quarterback as well and both of those guys are good players and talented guys,” Cutcliffe said. “I think they do a good job of making you defend the entire field and they also have versatile tight ends that can do different things. They can give you a lot of different formations without changing personnel groupings and that always makes someone difficult to defend.”

The Chargers will face off against Madison Central at 7 p.m. on Thursday at Bobby Holcomb Field.