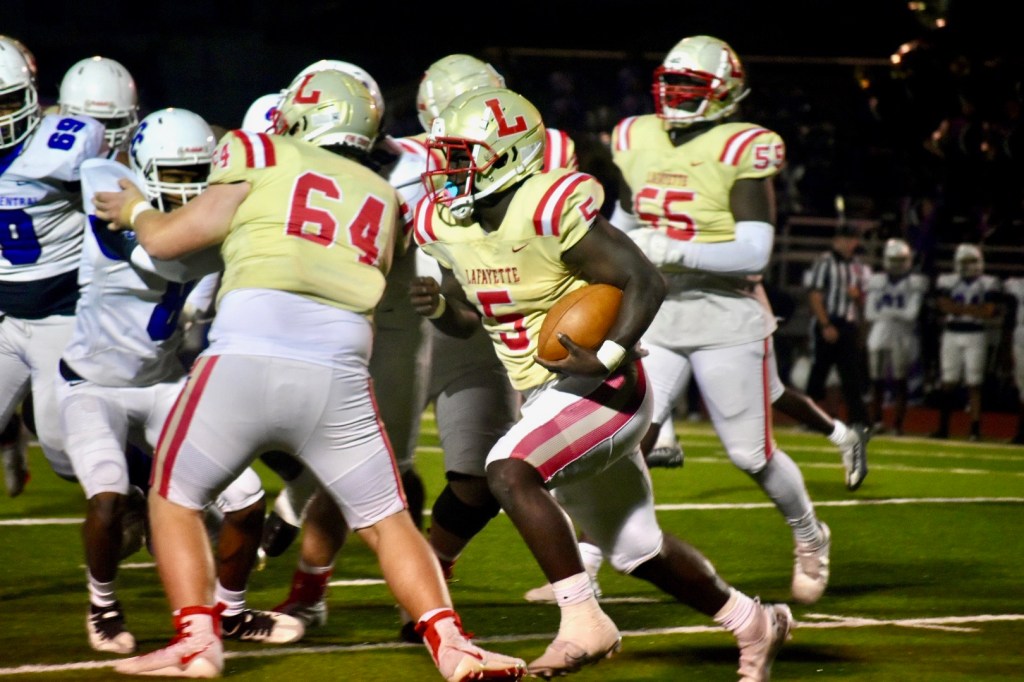 Lafayette's Jay Reed (5) runs against Cleveland Central in the Commodores' 35-15 victory over the Wolves on Friday. (Emily Smith/CMG)

Lafayette has a tall task on their hands this week as they travel to Lake Cormorant for a matchup with five-star defensive lineman Kamarion Franklin and the Gators.

The Commodores (6-4, 5-1 Region 1-5A) are coming off a dominant 55-22 victory over Greenville in which their offense exploded for 475 yards, but now face a difficult task against a strong Lake Cormorant defense.

Lafayette has done a good job controlling the line of scrimmage in recent weeks, carving up huge holes in the defense for running back Jay Reed.

The senior tailback has taken advantage of his opportunities as well.

He’s rushed for 150 yards or more in each of his last three contests, including a massive performance against Cleveland Central on Oct. 21 in which he put up a career-high 239 yards on the ground.

He will have his hands full however against a talented Lake Cormorant defensive line headlined by the 6-foot-5, 260-pound Franklin.

The five-star defensive end is regarded as one of the top prospects in the class of 2024, with offers in hand from Alabama, Georgia, Michigan, Texas and Ole Miss, among others.

“I mean I’m excited for the challenge and I think our kids are too,” Fair said. “We’ve got the opportunity to go up against a highly rated player and there’s two different ways to look at it: you could say he’s talented and hope he doesn’t get us too bad, or you can say ‘hey we’ve got an opportunity to show a lot of people what we’re made of too,’ and I think that’s the mindset that our offensive line is carrying into this week.”

The Commodores will also have their hands full with Gators running back Cur’darrius Bullock.

The 230-pound tailback has rushed for 815 yards and 13 touchdowns so far this season as he wears opponents down with his physical play.

“I mean he reminds you of our back a little bit when you watch him on film,” Fair said. “Obviously he’s hard to tackle, he’s got great feet and vision… so he’s a really good back and we’re definitely gonna have to play with our eyes up and be good tacklers.”

The game will have major implications on playoff seeding in Region 1-5A, as Lafayette enters Thursday’s matchup in a tie with Columbus for second place in the district.

The Falcons face region-leader West Point on the road this week, and will need to pull off a miracle upset in order to secure second place.

Lake Cormorant will also be fighting for playoff seeding on Thursday, as they enter the final week of the regular season in a tie with Cleveland Central and Saltillo for fourth place in the district.

The Commodores will kick things off against the Gators at 7 p.m. on Friday at Lake Cormorant High School.