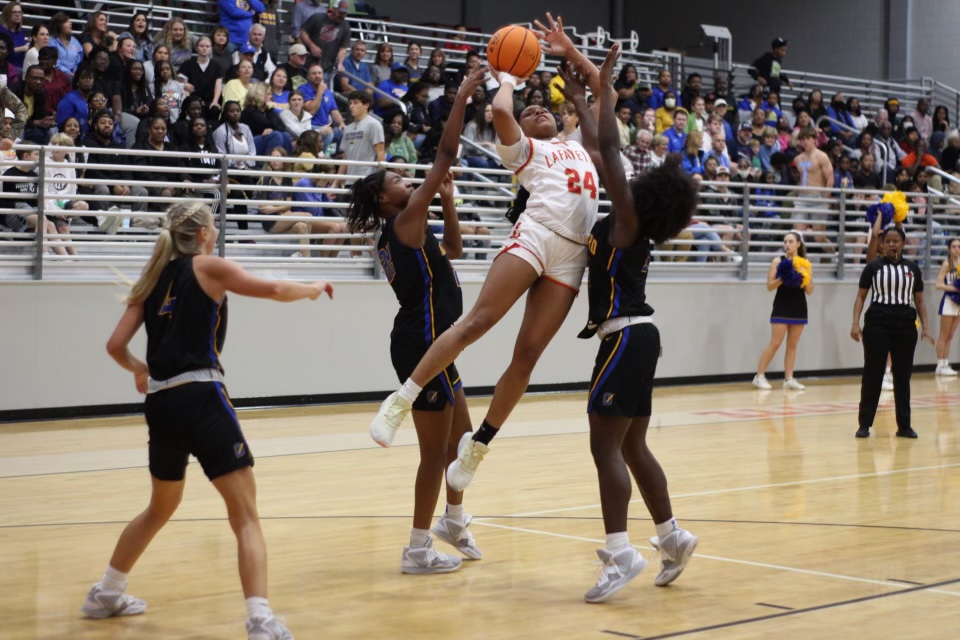 Lafayette's Harmony Jackson (24) drives to the rim against Oxford's Zoe Metcalf (14) and Alexis Ivy (22) in the basketball edition of the Crosstown Classic on Thursday, Dec. 8, 2022. Lafayette won 47-44. (Claire Anne Pugh/CMG)

The Lafayette junior was a key contributor to the Lady Commodores’ success in each of the past two seasons, but took her game to a new level this year as she embraced a larger role with the team.

The key to her newfound success? Confidence.

“When I looked back on my last two years playing varsity I didn’t see a lot of confidence so I promised myself this year that during volleyball, during basketball, during track that I would have total confidence in me and my teammates.” Jackson said.

That increased level of confidence has translated to remarkable success on the court, where Jackson has nearly doubled her scoring average from last season.

The 5-foot-8 wing is averaging over 10 points per contest this season compared to just 5.9 per game last year, attacking the basket with relentless intensity and getting to the rim seemingly whenever she wants.

She has also been more efficient from the field, shooting nearly 51% from the field this season after making just 40% of her attempts last year.

Jackson said confidence was the major factor in her success this season, but added that her time spent in the gym this offseason and a general refocusing of her priorities also played a key role in her remarkable progress.

“I worked out my upper body a bit [this offseason] because my upper body was very weak last year, ” Jackson said. “I would zone everybody out and only focus on me.”

She added she also stopped going out with her friends as much this year, instead spending more time in the gym and building relationships with teammates.

Her dedication to her craft paid dividends this week, when she was selected to participate in the Mississippi Association of Coaches North/South All-Star Game as a member of the North roster.

Jackson said the selection came as a shock.

She wasn’t sure how to process the emotions going through her head at first, but quickly settled down and allowed herself to enjoy the moment.

“There were a lot of emotions going through my head but I was excited,” she said. “All I thought about was ‘everybody else is talented so what if I sit the bench the whole game?’ Then I just stopped thinking about it and was like ‘I made the All-Star team, what am I talking about?’ Even if I don’t play, I made the team.”

Jackson and the rest of the all star selections will compete in the 2023 North/South game at A.E. Wood Coliseum in Clinton on March 18.