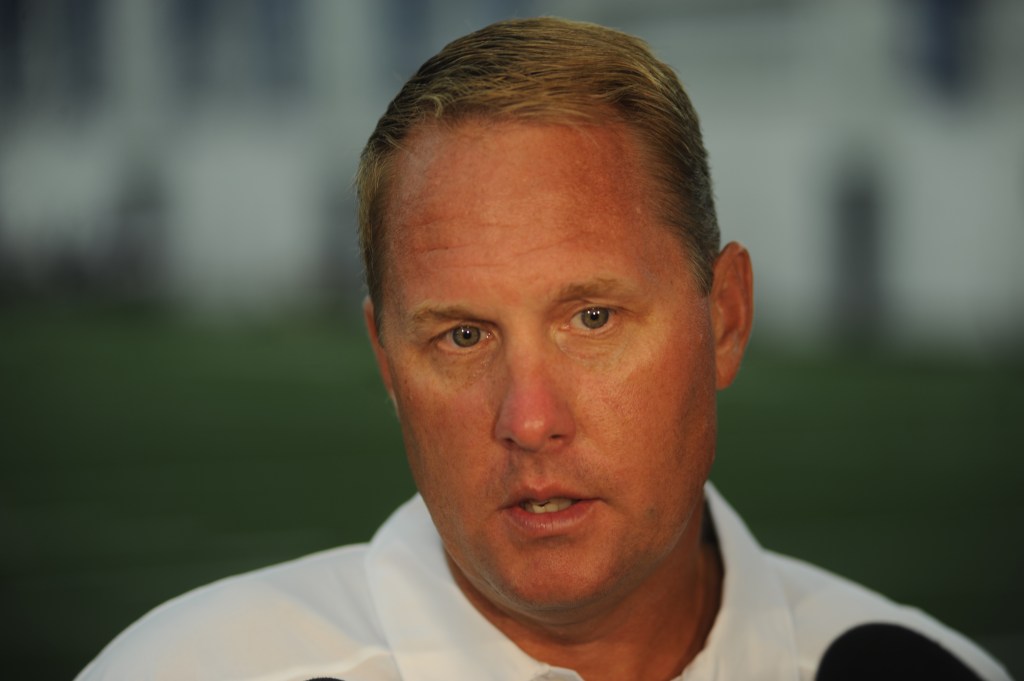 HOOVER, Ala. — Ole Miss football coach Hugh Freeze and the Rebels’ player representatives are getting their turn in front of the cameras and microphones Thursday at this year’s Southeastern Conference Media Days at the Hyatt Regency Wynfrey Hotel in Hoover, Alabama.

Freeze met briefly with local reporters this morning before beginning his day-long rotation at the hotel and spoke publicly for the first time on star offensive tackle Laremy Tunsil’s legal situation and the internal investigation the school is conducting into allegations made by his stepfather, Lindsey Miller, of Tunsil receiving improper benefits during his recruitment.

There’s also the legal spat the two are involved in stemming from an alleged physical altercation at the home of Tunsil’s mother, Desiree, on June 25. Both were arrested on domestic violence charges and await their days in court with Miller already pleading not guilty to his charges.

Watch Freeze talk on Tunsil, the health of the rest of the offensive line and more in the following video, including the state flag, a topic Freeze, a Mississippi native, didn’t hold back on.

The Rebels’ star wideout broke his left fibula and dislocated his ankle on the infamous play at the goal line late in a loss to Auburn on Nov. 1 at Vaught-Hemingway Stadium. Treadwell said in the spring he felt about 80 percent recovered from the injury, and he’s approaching full speed with fall camp looming.

The 6-foot-3 Treadwell, who’s projected to be a first-round pick in next year’s NFL Draft, is listed at 210 pounds on Ole Miss’ updated roster, down from the 220-plus pounds he play at a season ago.

“I think he lost a little weight and feels a little more explosive,” Freeze said. “I’m anxious to get pads on him and see how he responds when the ball’s a little high and in traffic. That kid is determined to make a full recovery, and I think he has.”

— Freeze gave Ryan Buchanan the slight edge coming out of spring in the race to replace Bo Wallace as the starting quarterback, but the competition will go into the late summer and beyond, he said.

Buchanan, junior college transfer Chad Kelly and DeVante Kincade will likely all get snaps in the first couple of games against UT Martin and Fresno State before the Rebels travel to Tuscaloosa, Alabama, for their SEC opener against Alabama.

That’s when Freeze would like to settle on one signal caller.

“You want to see how they perform in front of a crowd in a game setting, but I’d feel a lot better going into Week 3 if we need to know who the guy is going to be,” Freeze said.

— Jeremy Liggins, who was quickly moved to tight end after signing with Ole Miss in 2014 before eventually moving to offensive tackle, is back at tight end.

The former Lafayette High standout made the move again to give a position that’s extremely thin another body behind Evan Engram. Coaches called the move to the offensive line a permanent one in the spring, but that was before redshirt freshman Sammie Epps was dismissed earlier this summer for a violation of team rules.

“He’s prepared to go back to tackle should we need it, if we have injuries,” Freeze said. “We need him at tight end.”

Ole Miss brought two returning starters from the nation’s top scoring defense to Hoover in C.J. Johnson and Mike Hilton. Johnson, a fifth-year senior, has moved from defensive end back to middle linebacker, a position he hasn’t played full-time since high school, to fill the void created by the departed Deterrian Shackelford.

Johnson talks about the position change, gives his opinion on the state flag and speaks to the motivation of losing four of the final six games last season, including a 42-3 shellacking at the hands of TCU in the Peach Bowl, among other topics in the video below.

Hilton, who will be alongside Trae Elston at safety, admitted the morale among the team wasn’t the same when Treadwell was lost for the season, which helped contribute to the Rebels’ late-season collapse.

Hilton talks about the desire for a stronger finish this season, Treadwell’s progression and more in the following video.