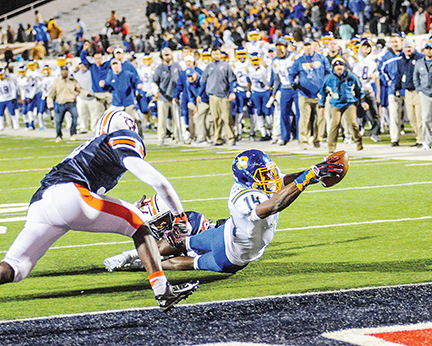 Bruce Newman Oxford’s DK Metclaf (14) is stopped just short of the goal line as time expires by Wayne County’s ZaBryon Jackson (11) in the MHSAA Class 5A championship game at Vaught-Hemingway Stadium on Saturday. The Chargers, playing in their third straight state finals, fell 45-41 to the War Eagles.

Wayne County stopped Oxford short of the goal line on the final two plays to escape with a 45-41 win late Saturday night at Ole Miss’ Vaught-Hemingway Stadium to claim the MHSAA Class 5A state championship.

Defensive tackle Benito Jones caught the go-ahead touchdown for the War Eagles (12-3) with 1:17 left, but Oxford drove to Wayne County’s 10-yard line in nine plays to give itself a chance. Quarterback Jack Abraham reached for the pylon on a second-down scramble but was ruled out at the 1, and D.K. Metcalf was stopped short on an outside run on the next play as time expired, sealing a wild win for Wayne County that featured 1,164 yards of offense.

Abraham went 35 of 52 for 550 yards and four touchdowns to set a single-game record for passing yards in his final game for the Chargers (12-3), who fell in the title game for the third straight season. Wayne County running back Freddy Jordan accounted for 339 all-purpose yards and had three touchdown receptions while Oxford’s Hiram Wadlington had nine receptions for a team-high 198 yards, 75 rushing yards and three total scores.

Petal couldn’t stop A.J. Brown or Andre Swanigan, and Starkville’s defense was its usual stingy self.

It all added up to a 6A state title for the Yellowjackets on Friday with a win over the Panthers.

Brown, the Yellowjackets’ star wideout, caught 10 passes for 117 yards and a touchdown to set a single-season school record for receptions, loosening up Petal’s defense for Swanigan to operate. Swanigan ran for a game-high 161 yards and three touchdowns on 24 carries, helping Starkville (14-1) claim its first state championship since 2012.

Brown had all of his catches in the first half as Starkville built a 21-7 halftime lead and rarely allowed Petal (10-5) to threaten. Swanigan ran for the Yellowjackets’ other two first-half scores and added a 1-yarder with 7:22 left in the third quarter to extend the lead.

Petal mustered just 219 yards and turned it over four times against the Yellowjackets, who allowed just 11.3 points a game coming in. The Panthers moved into Starkville territory once in the second half, but Abdural Lee intercepted Samuel Hopper near the goal line to end the threat.

Petal’s only score came on Hopper’s 3-yard touchdown pass to Nigel Wood with Starkville up 21-0 in the second quarter.

Bassfield scored the first five touchdowns and cruised to its fourth straight 2A championship with a 39-20 win over East Webster on Friday afternoon.

Five different Yellowjackets ran for a score as Bassfield (15-2) piled up 341 rushing yards. Kevin McNair’s 9-yard run with 3:27 left in the third quarter put Bassfield up 33-0. Ron Thompson led the Yellowjackets with 97 yards on 16 carries while Sanchez Berry carried just three times for 89 yards and a score.

Timothy Arnold threw just 13 passes for Bassfield, completing seven of them for 86 yards and a score. Jack Wilson threw a pair of fourth-quarter touchdowns and ran for another for East Webster (14-3), which had just 204 yards of offense.

Chandler Robinson threw three touchdown passes, Marquez Pam ran for another, and Simmons took down Resurrection Catholic for the 1A title in a matchup of unbeatens Friday.

Simmons (12-0) repeatedly used the big play to pull away in a game that featured eight turnovers. Robinson’s scoring tosses covered 17, 51 and 36 yards, his final one going to Mississippi State commit Nero Nelson to give the Blue Devils a 19-3 lead with 1:32 left in the third quarter, before Pam, who finished with 92 rushing yards, ripped off a 44-yard scoring scamper in the fourth.

Simmons’ defense clamped down on Resurrection (13-1) as the Eagles finished with just 95 total yards. Patrick Watts scored their only touchdown on an 11-yard run late in the fourth quarter.

Calvin Keys returned a kickoff 75 yards for a touchdown, and Detric Hawthorne’s successful two-point pass pushed Collins past Charleston for its second straight 3A title in a thrilling rematch Saturday.

Collins (15-1), which rallied for an overtime win over Charleston for the championship a season ago, overcame a 20-point halftime deficit with 28 fourth-quarter points. Ahmad Alexander gave Charleston (13-3) a 32-26 lead with a 5-yard touchdown run with 28 seconds left before Keys’ ensuing return and Hawthorne’s winning conversion.

Hawthorne ran for three scores and threw another to Keys, who finished with 171 all-purpose yards. Craig Buckley had two rushing touchdowns for Charleston while Billy Kimble also ran for a score.

Timorris Conner threw for 365 yards and four touchdowns, leading Noxubee County to its third 4A championship in four years over St. Stanislaus on Saturday.

Conner’s scoring tosses covered 14, 48, 31 and 20 yards as the Tigers (12-4) scored the game’s first 25 points and cruised from there. Noxubee County beat St. Stanislaus (11-4) in the title game for the second straight year.

Ladaveon Smith and Jeffrey Simmons each added touchdown runs for the Tigers while Kyziah Pruitt returned a fumble 97 yards to highlight a strong defensive performance for Noxubee County.

Myles Brennan had 268 yards passing and two touchdown passes for St. Stanislaus, but the quarterback was under constant pressure as the Tigers racked up seven sacks and 10 tackles for loss.