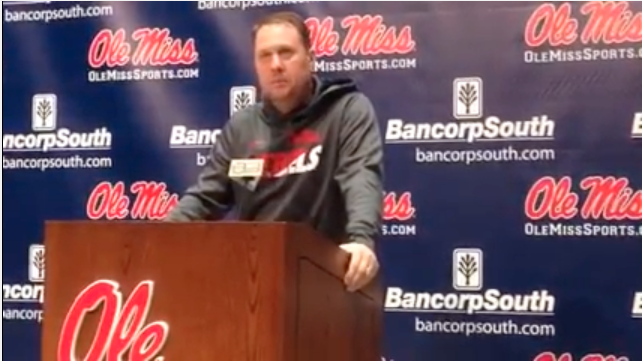 Preceding his team’s first bowl practice with a press conference at the Manning Center, Freeze said he briefly talked with Nkemdiche and his father over the phone Sunday but still doesn’t know all the details about an incident that occurred Saturday night where Nkemdiche broke through a window of a fourth-story room at the Grand Hyatt Atlanta in Buckhead before falling over a ledge and to the ground in front of the hotel’s driveway area, according to an Atlanta Police Department incident report sent to the EAGLE on Monday.

Nkemdiche, who was admitted to Mercy Grady Hospital with minor injuries, was charged with marijuana possession Monday after police found “approximately seven rolled marijuana cigarettes rolled in Cigarillo Blunt papers,” according to a statement made in a supplemental report by an officer identified as Lt. Hunt, who police said went in to the room afterward to “gather clues” about the incident.

Freeze said he found out from his conversation with the Nkemdiches that Robert received stitches in his back and leg and had a swollen ankle, but he said it’s too early to determine if the All-American defensive lineman will play in the Sugar Bowl on Jan. 1 against Oklahoma State.

Watch Freeze talk about Nkemdiche and his team’s bowl prep in the video below.