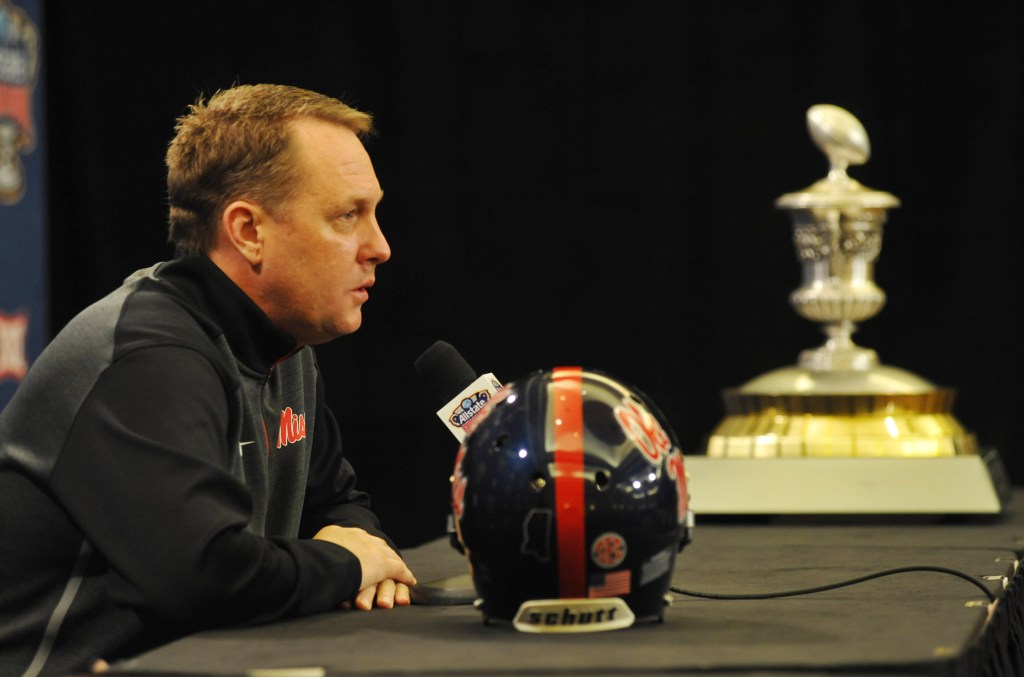 NEW ORLEANS – The Ole Miss football team has had its fun this week in New Orleans.

The Rebels are ready to get down to business.

The 12th-ranked Rebels (9-3) are a day away from tangling with No. 16 Oklahoma State (10-2) in the Sugar Bowl on New Year’s Day (7:30 p.m., ESPN) after a week full of other events that come along with every bowl trip. The team has sprinkled dancing, bowling and trips to a local World War II museum and children’s hospital around its preparation for the game since arriving in New Orleans on Saturday.

The Rebels had a rigorous workout that night to serve as a reminder, Freeze said, of why they’re here after laying an egg in their first-ever New Year’s Six bowl a year ago in the 42-3 loss to TCU in the Peach Bowl.

“We’ve had a good time, but as the festivities continue to build with the Rebels coming into town, we hopefully can keep our kids focused on the task at hand,” Freeze said. “That’s winning the Sugar Bowl.”

Here are some other nuggets from the press conferences of Freeze and Oklahoma State coach Mike Gundy:

— Outside of “a couple curfew violations,” Freeze said his players have behaved themselves this week. Freeze didn’t identify the players who missed curfew but said the penalty was “very severe.” Freeze said a player leadership council of C.J. Johnson, Mike Hilton, Justin Bell and Evan Engram was formed before the team arrived in New Orleans to help keep players organized and accountable.

— Ole Miss didn’t look like a team that would sniff this kind of bowl after two October losses, including a blowout at the hands of Memphis, and an overtime loss to Arkansas in early November, but the Rebels rebounded with wins over LSU and Mississippi State, a testament, Freeze said, to his team’s mental fortitude amidst the outside noise.

“Probably the most difficult thing that we have to do this day and time is manage the mental psyche of our kids, coaches and everyone in the building. I’m really proud of the job our staff did and our leadership of our team did in remaining mentally tough knowing we’ve got a lot to play for down the stretch,” Freeze said. “To finish the season with the Magnolia Bowl and the Egg Bowl and now playing in the Sugar Bowl just speaks to that mental toughness and resolve that our team showed.”

— Chris Carson is Oklahoma State’s leading rusher with 504 yards, and the Cowboys are averaging just 132 yards a game on the ground, but Freeze said he’s been impressed by OSU’s innovative ways to pick up rushing yards at times to go with its prolific passing attack.

“The way (Gundy) has smoke-and-mirrored his way to 10 wins in regards to the run game has been very impressive,” Freeze said. “The way they create extra gaps and are always creating new things with motion, it creates problems for your fits defensively. He’s done a nice job with that.”

— Freeze has frequently talked about how out of whack Ole Miss’ preparation for last year’s Peach Bowl was as far as the practice schedule. The Rebels have made “every day be the same,” Freeze said, but the biggest change has been the physicality of the this year’s practices leading up to the Sugar Bowl.

— Recruiting has fueled Ole Miss’ turnaround under Freeze, specifically a 2013 class that will begin to break up after Friday’s game. One of the headliners, Robert Nkemdiche, has already declared for next year’s NFL draft after being suspended for the Sugar Bowl following his fall from an Atlanta hotel room and subsequent marijuana possession charge earlier this month.

Offensive lineman Laremy Tunsil, who’s widely viewed as a top-5 pick in next year’s draft, is likely gone as is wideout Laquon Treadwell, who’s also projected to go in the first round, though neither has made a decision publicly. Ole Miss is in line to sign another top-5 class nationally in February, making for recruiting success that was unheard of at Ole Miss before this junior class came on board.

“The Ole Miss brand has come so far,” Freeze said. “I will forever be indebted to the Robert Nkemdiche and Laquon Treadwell and Laremy Tunsil and the other kids, too, that have done a remarkable job.  All of the kids that choose to come with you, you’re indebted to.”

Freeze said he also had a new appreciation for Tunsil, who was suspended for the first seven games this season after an NCAA investigation found he received extra impermissible benefits and could’ve decided not to risk injury in the Rebels’ final five games with such a high draft stock.

“All of the outside noise had his head at that moment when he sat so many games was saying, ‘Just go on and go. Why do you want to play?’ And I really came to a new appreciation of him as a person when he said, ‘No, I owe it to my team to play.'” 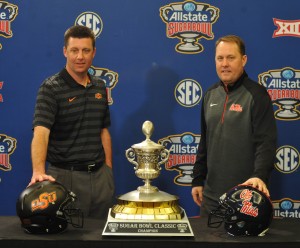 — Ole Miss will see OSU quarterback J.W. Walsh at times Friday, though not as much as starter Mason Rudolph. Walsh, one of the nation’s top-ranked dual-threat signal callers coming out of high school in 2011, has had an up-and-down career with the Cowboys and has spent his final season as the backup after missing most of last season with an injury.

The senior has thrown just 71 passes this year but has accounted for 24 touchdowns, doing most of his damage on the ground. Walsh had rushed for 285 yards and 11 TDS, his longest run going for 64 yards.

“J.W. will always have a special place in the hearts of the Oklahoma State family with the way that he has handled his career, and he has had a great three weeks of preparation,” Gundy said. “I have enjoyed watching him and I feel like that he is looking forward to playing in the game.”

— Gundy has noticed Ole Miss’ recent recruiting efforts and said the Rebels “could be as talented as a team as anybody in the country.” The Cowboys’ coach is particularly familiar with Treadwell, whom Gundy made a hard run at during the recruiting cycle three years ago.

“It’s a talented group,” Gundy said. “We will need to play our best game and put ourselves in position to have success based on the talent level that Ole Miss has in this game.”

— Friday’s matchup will give fans another chance to look at a Big 12 offense against an SEC defense, but Gundy said styles and conference pride haven’t been big talking points with his team this week.

“We come up with plans, and our preparation is to play the very best game we can and we want to win every game we play in and that’s the approach that we have had in this bowl game,” Gundy said.

— Ole Miss has an offense that more resembles a high-scoring passing attack that the Big 12 is well known for as Friday’s game will pit two of the nation’s top 11 scoring offenses against each other. But Gundy said with so much time to prepare, bowl games don’t always go according to script.

“It’s interesting in bowls, as soon as you start to guess it’s going to be a high-scoring affair, defenses play their tail off, and then sometimes I have been in bowl games where we were expecting it to be low scoring and it goes the other way,” Gundy said. “The only thing that I’m somewhat convinced is that Ole Miss is a really good football team and we feel like that we have a really good football team.”

BACK TO BUSINESS: Rebels report to New Orleans for…