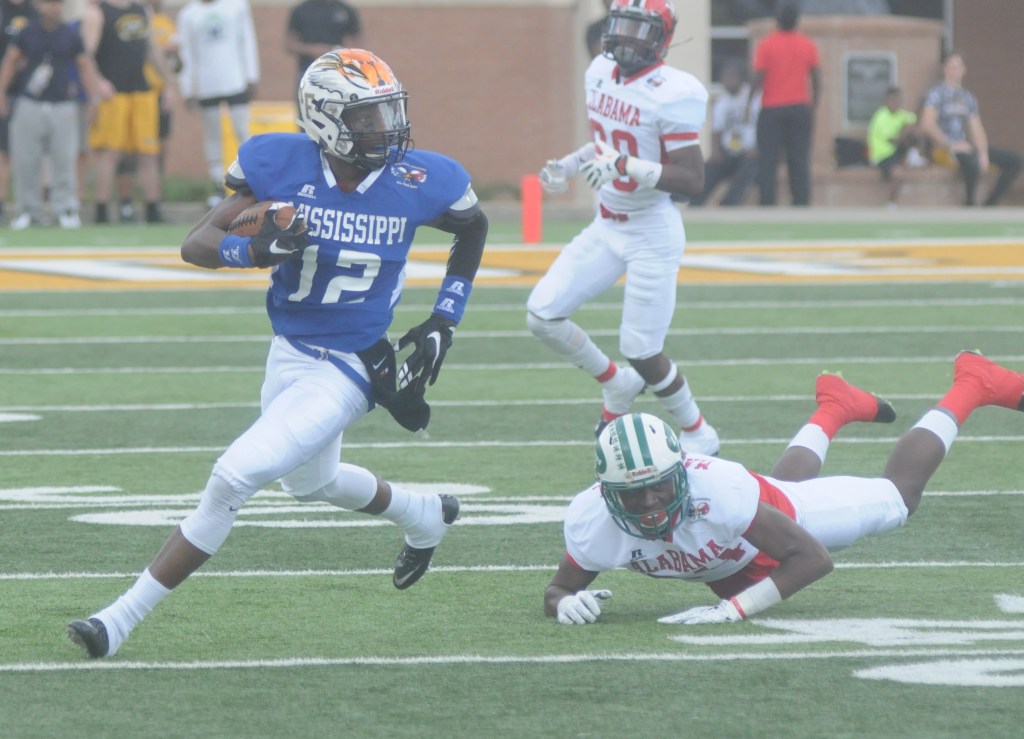 Germantown's Nigel Knott (12) returns a punt for Team Mississippi in the Mississippi-Alabama All-Star Classic on Dec. 12, 2015, in Hattiesburg. Knott took his final official visit over the weekend to Ole Miss. (Davis Potter)

Germantown cornerback Nigel Knott could make a decision sooner rather than later about which school he’s going to sign with, but it will be anything but easy.

Knott took his final official visit before National Signing Day to Ole Miss over the weekend and may announce the winner among a group of finalists that includes Ole Miss, Mississippi State, Alabama and Oregon on Monday, said Knott’s mother, Sabrina Givens, who accompanied the consensus four-star prospect on his visit to Oxford.

“(Monday) is his birthday. I don’t know where it’s going to be,” Givens said of Knott’s decision. “I know he said it was going to be at 1:30, and I’m thinking it might be at the school. I’m not for sure.”

Oregon is a distant fourth in the pecking order for the 5-foot-11, 175-pound Knott, Givens said, because “it’s too far, and he knows that we’re all close, a family,” leaving Mississippi’s top-ranked cornerback prospect by every major recruiting service to likely choose between playing his college ball in his home state or Alabama. Knott has family connections to all three schools.

“I’m thinking right now, he’s really torn between those three because he’s got family at (Mississippi) State, which is his sister. I went there for a little while also,” Givens said shortly before they left campus Sunday morning. “His dad played here, his (godfather) played here, I went here (for undergraduate studies), and he was born here, so he feels like he’s got ties here. My mom’s cousin played at Alabama, and his dad is in Alabama.

“Today, I know for a fact he’s going to be sitting in the backseat and he’s not talking to anybody with his headphones on, and I know what he’s doing.”

Knott visited Mississippi State and Alabama earlier this month, and Givens said it was her opinion that the visits to the three schools “were all the same to him.” Knott’s decision, she said, will likely come down to which school he feels most comfortable at both athletically and academically.

“I told him he needs to look and see his major,” Givens said. “He’s going to major in finance and minor in communications or vice-versa. He needs to see which (school) is going to put him out there the most and help him. I told him we can’t base everything on a relationship with a coach because they’re either getting fired, retiring or going on to something better.”

Givens said she’ll support whatever decision her son makes as long as it keeps him close to home.

Said Givens, “I told him I’m content as long as it’s one of the three (Ole Miss, Mississippi State or Alabama).”

UPDATED Feb. 1 at 1:40 p.m.: Knott has chosen Alabama over his other three finalists, posting a video through Bleacher Report on his Twitter account Monday afternoon to reveal his decision.

See Monday’s edition of the EAGLE for much more coverage from Ole Miss’ final recruiting weekend before National Signing Day, which is Wednesday.