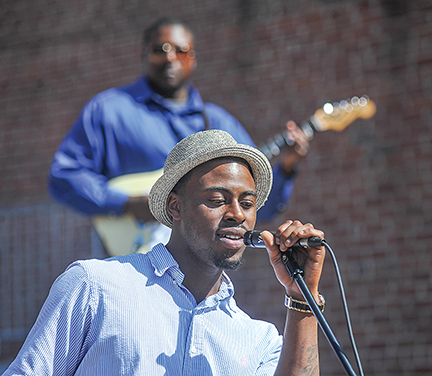 Those were the words printed on $10 T-shirts for sale at an Oxford event Sunday afternoon on the Square.

Oxford resident Eleanor Green, 43, is the program director of Good Food for Oxford Schools, a farm to school program.

“We work to bring local food into our school cafeterias,” she said before performers took the stage for the fourth annual Gospel Choir Showcase that combined music and food.

Food samples from the school district’s cafe were available for purchase. Children were invited to make sweet potato energy bites in a kids’ tent, and one team making sweet potato black bean burgers competed to have their dish added to the school menu next year.

“The idea was to build a weekend to close Double Decker weekend and invite the community to come out and support the schools,” said Green.

“It’s always good to be a part of the Double Decker festival, and as a whole, the Oxford community,” she said. “We are just here to give God the glory and support our children.

“While they work hard, we are working hard behind them, and we want to encourage them in every way to keep God first so they can excel higher.”

Brookhaven native Jake Sessums, 33, who owns the YoknapaTaco food truck, was one of the cooking demonstration judges.

“One of the great things that Good Food for Oxford Schools and the local food movement has done is create awareness for these kids about their eating habits,” he said. “I think it’s a great program and something I’ve seen grow, even in the last couple of years since I’ve been here.”

“It’s something that is going to keep going forward,” he said.