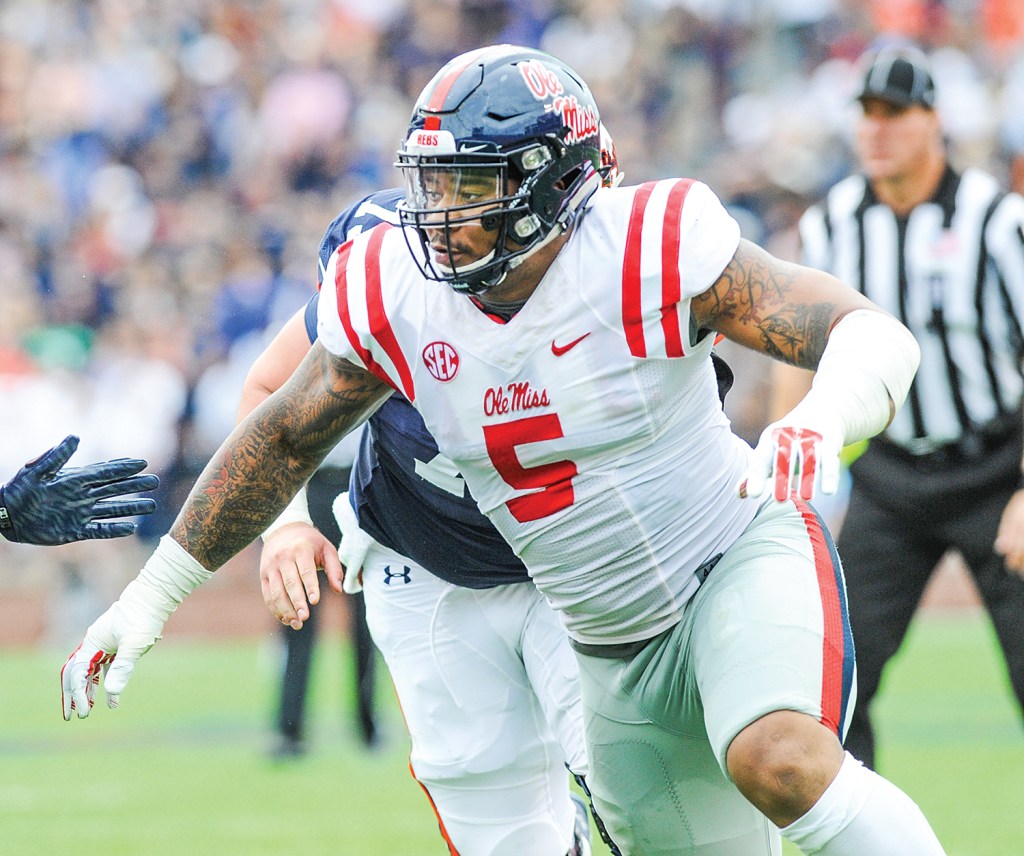 Defensive tackle Robert Nkemdiche (5) was the third and final former Ole Miss player taken in the first round of the NFL Draft Thursday, going 29th overall to the Arizona Cardinals. (Bruce Newman)

Through it all, Robert Nkemdiche came out in the first round.

Draft projections were all over the place for Nkemdiche, who caused some teams hesitation following his four-story fall from an Atlanta-area hotel room in December that effectively ended his college career. Teams were also reportedly concerned about the 6-foot-4, 296-pounder’s lack of statistical production after he finished with 98 tackles and just 19 tackles for loss and seven sacks in 35 career games with the Rebels, but he was talented enough for the Cardinals to take him three picks before the first round ended.

Nkemdiche, the nation’s No. 1 high school recruit coming out of Grayson High (Loganville, Georgia) in 2013, was a two-time All-American and two-time All-Southeastern Conference selection.

But his history-making selection wasn’t the biggest story of the night concerning Ole Miss.

Tunsil, at one time projected to be the No. 1 overall pick, slid out of the top 10 before being taken 13th overall by the Miami Dolphins after a video of him smoking a bong in a gas mask was posted to his Twitter account just minutes before the draft started. According to multiple reports, Tunsil’s agent, Jimmy Sexton, acknowledged it was Tunsil in the video but said the account was hacked, and Tunsil, after immediately deleting his account, reopened it briefly to post an apology.

“I recreated this account to publicly apologize for the recent video posted,” Tunsil tweeted. “I promise to work hard on and off the field.”

After Tunsil was drafted, screenshots of an alleged messaging conversation between he and someone shown on the screenshots as “John Miller” were posted to Tunsil’s Instagram account. Tunsil told reporters during a press conference after his selection that account was also hacked, but he didn’t have any idea who it might be.

John Miller is Ole Miss’ assistant athletic director. The messages shown on the screenshots were dated Feb. 15, 2015 and April 7, 2015.

Tunsil also asked what he should do about his mother’s $305 power and water bill. In one of the messages shown on the screenshot, “Miller” answered, “I thought we all agreed on an amt – that number keeps changing.” Asked by a reporter during his press conference if he had taken money from a coach during his time at Ole Miss, Tunsil said he had.

Ole Miss has issued a statement regarding Tunsil’s admission.

“The university is aware of the reports from the NFL Draft regarding Laremy Tunsil and potential NCAA violations during his time at Ole Miss,” the statement said. “Like we do whenever an allegation is brought to our attention or a potential violation is self-discovered, we will aggressively investigate and fully cooperate with the NCAA and the SEC.”

The Vikings took Treadwell with the 23rd overall pick. He was the fourth receiver taken.