BLOG: Woodman leads No. 9 Rebels to series win over LSU 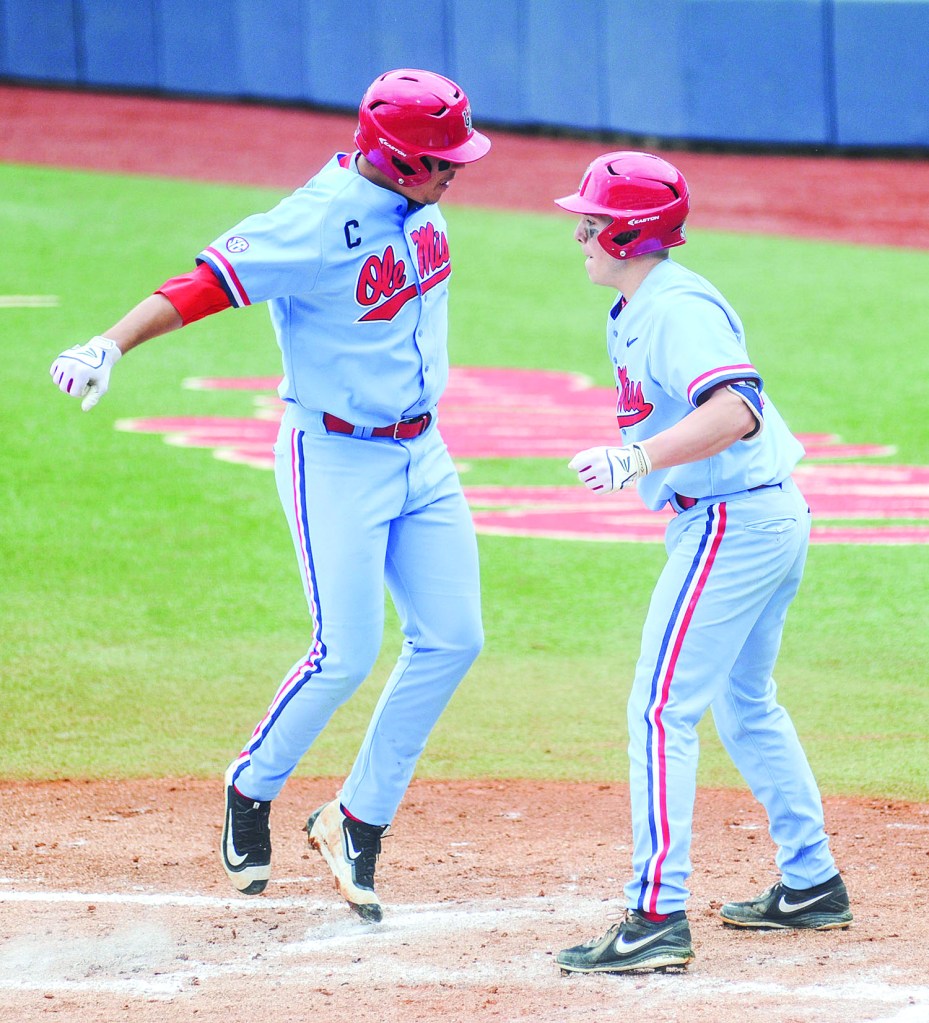 Ole Miss third baseman Colby Bortles (25), left, hits a solo home run and is congratulated by catcher Henri Lartigue (22) against LSU at Oxford-University Stadium on Saturday. The Rebels won 8-2 to clinch the series and improve to 12-9 in Southeastern Conference play. (Bruce Newman)

Ole Miss catcher Henri Lartigue had the big weekend against Auburn last week. It was J.B. Woodman’s turn this week against the other Tigers.

The center fielder went 2-for-3 with four RBIs and two two-run home runs to lead the No. 9 Rebels past No. 8 LSU in an 8-2 win in the series finale on Saturday at Oxford-University Stadium.

It was the second straight Southeastern Conference series win for Ole Miss (33-12, 12-9 SEC), which has won five of its last six games in conference play. It was a crucial series as many national pundits viewed the winner in the driver’s seat for possibly the SEC’s final hosting spot with less than a month left of the regular season remaining.

Woodman got it started in the first inning with his first home run of the day coming with two outs, scoring second baseman Tate Blackman. Third baseman Colby Bortles followed that up with a solo home run, his sixth on the season, to make it an early 3-0 lead for the Rebels.

Ole Miss added a run in the second and third innings. Woodman struck again in the fifth inning with another two-run shot, once again scoring Blackman for the winning margin.

The offense scored eight runs on 12 hits with four Rebels having a multi-hit games.

“I haven’t hit a ball to deep center I don’t even think in (batting practice), so it was cool to get two for sure,” Woodman said. “It was good to start out with, but when it got a little more rainy, it got tough. … We hit a part there where we were trying to do too much, and I think we were trying to get back to who we are with shorter swings. It’s been good for sure.”

Freshman James McArthur got his first SEC start of his career after coming in against Auburn in relief last weekend. The right-hander went 3 1/3 innings, including having to wait out a 46-minute rain delay that occurred in the second inning. He gave up four hits while walking four and striking out two LSU batters.

“I’m thankful I got the opportunity,” McArthur said. “It’s a lot of fun out there, a lot of competition out there. I just did the best I could to compete and attack the strike zone. … It’s satisfying, but the goal doesn’t change. You just go out there to try and get a win and do the best you can.”

John Valek III got the start for LSU (28-16, 11-10) but was not long for the game. The senior lasted 1 1/3 innings, including just one pitch after the rain delay. Valek gave up four runs on four hits while striking out one batter and issued no walks.

The Rebel bullpen continued McArthur’s solid outing, holding the Tigers to just the one run. Andy Pagnozzi relieved McArthur and worked 3 2/3 innings of one-run baseball and gave up only four hits and struck out three. Pagnozzi earned the win, improving his record to 7-2.

Dallas Woolfolk and Will Stokes combined to get the final six outs of the game.

LSU had 10 hits on the game but stranded 11 runners on base and was 2-for-13 with runners in scoring position.

The Rebels return to action on Wednesday when they host Arkansas Pine-Bluff for their final home midweek game of the season. First pitch is scheduled for 6:30 p.m. (SEC Network+).