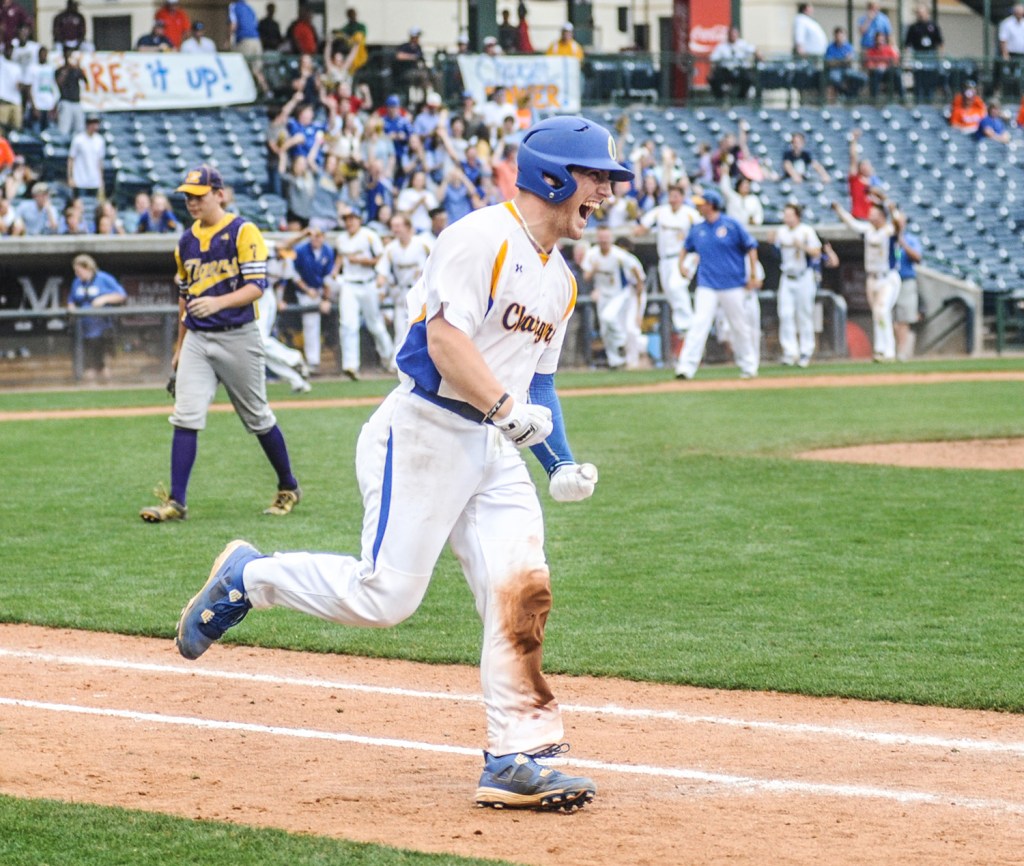 Oxford’s Thomas Dillard celebrates after hitting a walk-off home run, his second of the game, to give the Chargers a 10-0 win in six innings over Hattiesburg in Game 2 of their MHSAA Class 5A state championship series at Trustmark Park in Pearl on Thursday. Oxford won their second straight state championship. (Photo by Bruce Newman)

PEARL — Oxford dominated Hattiesburg for a 10-0 win in the second game of the MHSAA Class 5A championship series Thursday at Trustmark Park, completing a sweep of the Tigers to claim its second straight state title.

Oxford (28-8) went back-to-back for the first time in school history and won its third state title overall. The Chargers outscored Hattiesburg (26-9) 15-3 in the series and have won three of their last four state finals games by way of shutout.

The Chargers had a 4-0 lead after the first against Hattiesburg’s Joe Gray (5-2) and didn’t let up. Senior catcher Thomas Dillard capped the rout with a solo homer to right, his second of the game and 16th of the season, in the bottom of the sixth off Noah Thornton to give Oxford the walk-off win.

Dillard also walked once and scored three runs. Drew Bianco, Sage Mullins and Preston Perkins each had two RBIs while Houston Roth also drove in a run for Oxford, which plated four more runs in the second  and another in the fourth before Dillard’s run-rule blast gave Oxford its seventh straight victory to end the season.

Watch Dillard, a transfer from Briarcrest Christian School, talk about the winning homer and getting a championship in his only season at Oxford in the following video.

Roth, the Chargers’ senior right-hander, turned in his third straight complete game to end his high school career. The Ole Miss signee scattered three hits and worked around four walks while striking out six to finish the season 10-0.

The Tigers got a runner past second base once against Roth, who lost just two games in his varsity career, with Drew Bianco throwing out Chris Cooley at the plate in the second on Devin Lang’s infield single. Gray took the loss after allowing nine runs — only five were earned — on six hits with four walks and four strikeouts in four innings.

Watch Oxford coach Chris Baughman talk winning another title and the events of the final inning as well as the team receiving the championship trophy in the videos below.

See Friday’s edition of the EAGLE for complete coverage of Thursday’s game.