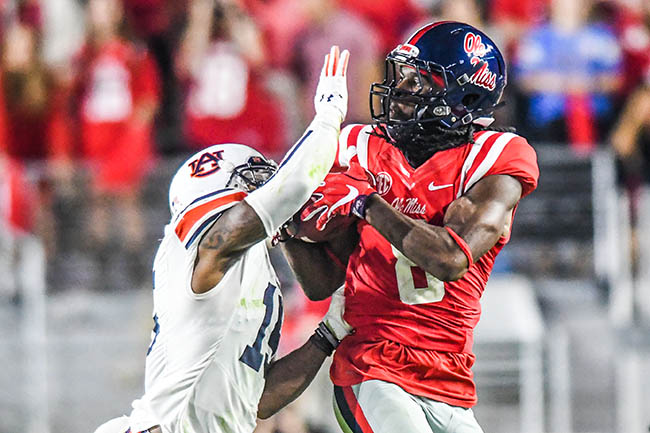 Four former Ole Miss players will participate in the NFL Scouting Combine in a couple of weeks.

Tight end Evan Engram and receiver Quincy Adeboyejo will join defensive end Fadol Brown and defensive tackle D.J. Jones as Ole Miss’ representatives, according to a list of invitees posted on the NFL’s official website Monday morning. The list has since been taken down.

The inclusion of Brown and Jones wasn’t a surprise as the pair recently announced they had been invited to the annual combine, which will take place Feb. 28-March 6 at Lucas Oil Stadium in Indianapolis. The NFL Draft will be held April 27-29 in Philadelphia, Pennsylvania.

It will be another chance for NFL personnel to evaluate the 6-foot-3, 235-pound Engram, the Rebels’ tight end-slot receiver hybrid who also participated in last month’s Senior Bowl. A four-year starter, Engram had 65 catches for 926 yards and eight touchdowns as a senior and finished his career as Ole Miss’ all-time leader in catches, receiving yards and touchdowns for a tight end.

NFLDraftScout.com ranks Engram as the third-best tight end prospect for this year’s draft.

Adeboyejo went from the slot to the outside as a senior, finishing as the Rebels’ fourth-leading receiver a season ago with 35 receptions for 456 yards and a score. One of Ole Miss’ fastest players, the 6-3, 195-pound Adeboyejo may turn some heads with his speed in a combine setting.

Brown became a three-year starter for the Rebels after transferring from Florida International, though he played in just eight games with four starts as a senior after a slow recovery from foot surgery the previous season. The 6-4, 280-pounder finished with 39 tackles, 5.5 tackles for loss and 2.5 sacks.

A junior college transfer, Jones started a handful of games in 2015 before becoming a full-time starter at nose tackle as a senior. He tallied 30 tackles, three tackles for loss, two sacks, a fumble recovery and an interception this season.

Quarterback Chad Kelly and receiver Damore’ea Stringfellow are notable omissions from the combine, though Stringfellow not getting an invite came as no surprise. Stringfellow pleaded guilty to two counts of fourth-degree assault and one count of third-degree malicious mischief before transferring to Ole Miss, and the NFL recently implemented a rule that prohibits anyone with misdemeanor or felony convictions involving violence from participating in the combine.