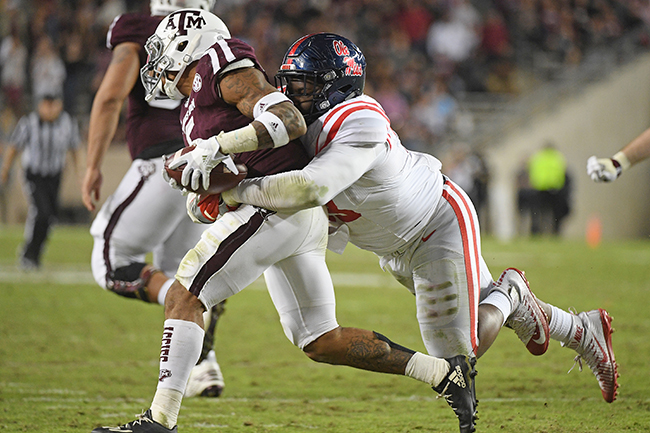 A pair of Ole Miss defensive linemen will get a chance to make their case for NFL teams on the biggest pre-draft stage later this year.

Defensive end Fadol Brown and tackle D.J. Jones have been invited to the NFL Scouting Combine. This year’s combine will take place Feb. 28-March 6 at Lucas Oil Field in Indianapolis.

Jones announced his invitation on Twitter on Friday while reports surfaced that Brown had also been invited before Brown later confirmed it with a tweet. The pair will join some of the nation’s other top draft-eligible prospects to work out under the watchful eye of coaches, top executives and medical personnel from all 32 NFL teams.

Brown played eight games and started the last four while dealing with a nagging foot injury early this season, finishing with 39 tackles, 5.5 tackles for loss and 2.5 sacks. The 6-foot-4, 280-pounder was a three-year starter after transferring from Florida International before the 2013 season.

The 6-0, 321-pound Jones, a two-year contributor after signing with Ole Miss out of East Mississippi Community College in 2015, started all 12 games this season and had 30 tackles, three tackles for loss, two sacks, a fumble recovery and an interception.

Jones is ranked as the 21st-best defensive tackle prospect for next year’s draft by NFLDraftScout.com while the website ranks Brown No. 39 among draft-eligible ends. Fellow defensive end Marquis Haynes announced earlier this month he would return to Ole Miss for his senior season.

Blessings on top of blessings, also honored to be invited to the NFL Combine! ??

FOREVER A REB ! "Let's get it" Lil durk voice https://t.co/UGu1fAASFN