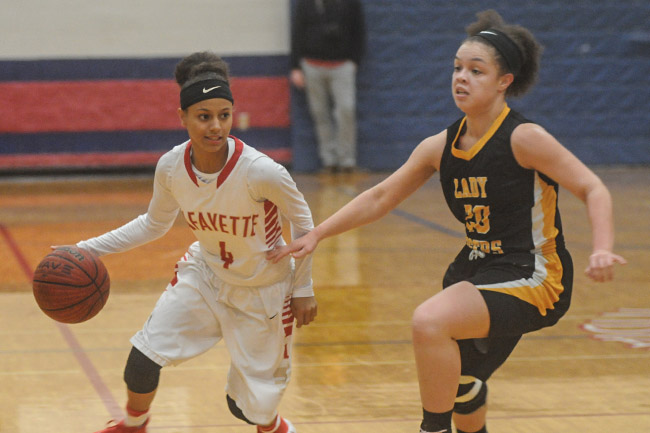 BYHALIA — After advancing past Tuesday’s opening round of the Region 2-4A tournament, Lafayette’s boys cemented themselves along with the girls’ team in next week’s opening rounds of the MHSAA Class 4A playoffs. The only thing left to figure out is which seed they will be. The seminal rounds on Thursday night inside the Byhalia High School gym helped sort some of that out.

The girls advanced to Friday’s championship game and will play for either the No. 1 or No. 2 seed out of the region while the boys fell to host Byhalia and will play in the consolation game, which will determine the No. 3 and 4 seeds.

The girls got the afternoon started with a 57-38 win over Ripley to advance to the 2-4A title tilt at 7 p.m. It was not a smooth start for Lafayette as the energy was lacking the entire first half, but the Commodores were able to lead wire-to-wire. After a 12-6 first quarter, the Commodores were only able to score 10 points in the second quarter for a 22-15 halftime lead.

“We didn’t play well,” Lafayette head coach Shayne Linzy said. “With that being said, Ripley really got after it. They played hard all day long. … I think in the second half, we were much better. Still not as good as we need to be, but we were more efficient.”

Struggling with Ripley’s pressure in the first half, which flustered their offense, the second half proved to be a better indicator of what people were used to seeing out of Lafayette. Shaniyah Buford led the Commodores with 16 points, scoring 12 of them in the second half. Mariah Holland followed with 15 points and also did most of her scoring in the final two quarters. Xhiir Burgess and Orianna Shaw each scored 10 points.

Even with the poor effort, the Commodores controlled the game, which gave Linzy confidence heading into Friday’s title game against host Byhalia. The Indians were the only team to defeat Lafayette in region play during the regular season, and it will be a repeat matchup for the 2-4A crown.

“They know what they want to do. We have a game plan,” Linzy said. “We get a chance to host on Monday. I think the girls will be ready. This might have been one of those games where it was a wake-up call.”

No team on the boys’ side had defeated Byhalia all season, and the Indians proved why they were the No. 1 seed in the region tournament on Thursday night, defeating Lafayette 62-34. The Commodores will play in the consolation game at 5:30 p.m.

It was a case of bigger, stronger and faster for Lafayette as they were trying keep up with Byhalia. The Indians used their size and strength to their advantage in the paint, grabbing offensive rebounds and making the Commodores pay.

“We gave them too many second chances,” Lafayette head coach John Sherman said. “Second-chance buckets to those guys are easy buckets. We had a tough time guarding the pick-and-roll with their bigs.”

Byhalia’s Avion Graham caused fits for Sherman and his team all night. The game was within 10 points early in the second quarter until Graham hit two of his seven 3-pointers back-t0-back to stretch the lead back out. Graham finished with a game-high 28 points. After only trailing by six points at the end of the first quarter, Byhalia took a 30-15 lead into halftime. It only grew from there.

“They’re a good team,” Sherman said. “It was a physical game, and they’re going to win that every time. They’re just bigger, stronger, faster.”

Jonah Matlock was the lone Commodore to score in double figures with 11 points. Stephon Isom finished with nine points, scoring all of them in the first quarter with three 3-pointers, while Hogan Linzy scored seven points.