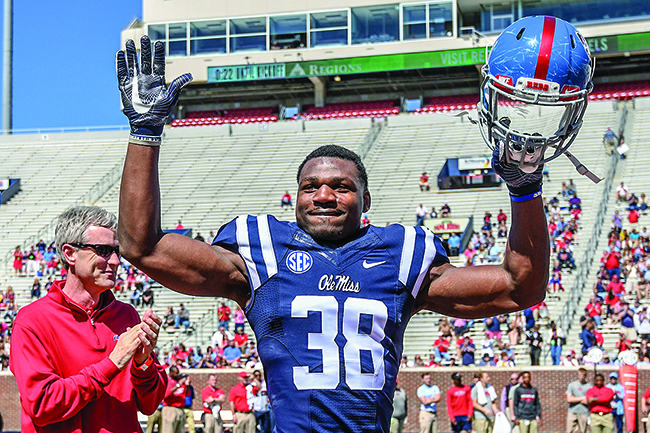 Haynes was named the Chucky Mullins Courage Award winner during a breakfast ceremony before the Grove Bowl. The award, which annually goes to a defensive player, is in its 28th year in memory of Mullins, the former Ole Miss safety who died from complications from the infamous hit he put on Vanderbilt’s Brad Gaines on Oct. 28, 1989 that left him paralyzed.

Haynes will wear Mullins’ No. 38 this fall. The Jacksonville, Florida native came to Ole Miss by way of prep school after failing to qualify academically at North Carolina.

A rising senior defensive end, Haynes has proven to be one of the Southeastern Conference’s top pass rushers the last three seasons with 24.5 career sacks, the third-most in school history. He led Ole Miss with seven sacks last season and had 11 tackles for loss.

Haynes, who likely would’ve been a mid-round pick in this year’s NFL Draft, decided in December to return to Ole Miss for another season. The 6-foot-3, 225-pound Haynes is ranked the No. 2 outside linebacker prospect for the 2018 draft by NFLDraftScout.com.

Other spring awards were announced just before kickoff.

Daronte Bouldin was presented with the J. Richard Price Courage and Compassion Award, which goes to the upperclassman lineman who coaches most believe demonstrated extraordinary courage and unusual compassion in his dedication to the team and to Ole Miss.

Tight end Dawson Knox was presented with the Park Stevens Memorial Scholarship, which is awarded annually to the top walk-on during the spring.