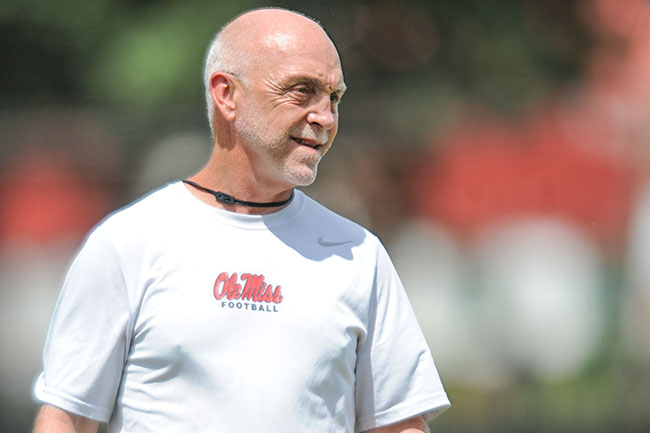 Ole Miss’ coach said Thursday at Southeastern Conference Media Days that he and his former off-field staff member “are not having conversations right now” as the NCAA’s investigation into the football program continues to play out. Farrar and Ole Miss are at odds over Farrar’s level of guilt in multiple rules violations that he’s been charged with in the Notice of Allegations the school received in January 2016 that’s since been amended.

Farrar was fired as the Rebels’ assistant athletic director for high school and junior college relations in December after being named in four of the school’s 15 Level I allegations, most involving the recruitment of Mississippi State linebacker Leo Lewis. Farrar is accused of getting boosters in contact with Lewis and other recruits and arranging for Lewis to receive cash payments ranging from $13,000 and $15,600.

Ole Miss refutes the allegation of payments but acknowledged Farrar’s involvement with boosters, referring to Farrar in its 124-page response to the NOA as “an outlier” who went rogue in a scheme to circumvent the rules and intentionally hide his actions from Freeze.

Farrar’s attorney, Bruse Loyd, filed a response to the NOA on his client’s behalf on May 23 in which Farrar denied all the charges to some extent, including cash payments, arranging for Lewis and other recruits and their family members to receive thousands of dollars worth of free merchandise from Rebel Rags and intentionally lying to Ole Miss and the NCAA’s enforcement staff during interviews.

Loyd issued a statement on Farrar’s behalf last month accusing Ole Miss of conspiring to throw Farrar “under the bus.” Should the charges against Farrar stick, he could be hit with a show-cause penalty that would require any school interested in hiring him to appear before the Committee on Infractions to argue why it shouldn’t be levied with the same penalties.

The NCAA is scheduled to respond with its case summary by month’s end before a hearing with the Committee on Infractions is scheduled.

But Farrar’s response made it clear his beef is with the school’s decision makers, not Freeze. He said Freeze never asked him to break rules and asked the Committee on Infractions to give Freeze “every opportunity and consideration in these hearings.”

Despite appearances, Freeze said the feeling is mutual.

“I love everybody that’s ever been on our staff. I really do,” Freeze said. “Hopefully in time when everything shakes out, we can maybe figure out what’s what and why things were the way they were. Again, there’s still a lot of things to be determined when we go before the Committee on Infractions.”