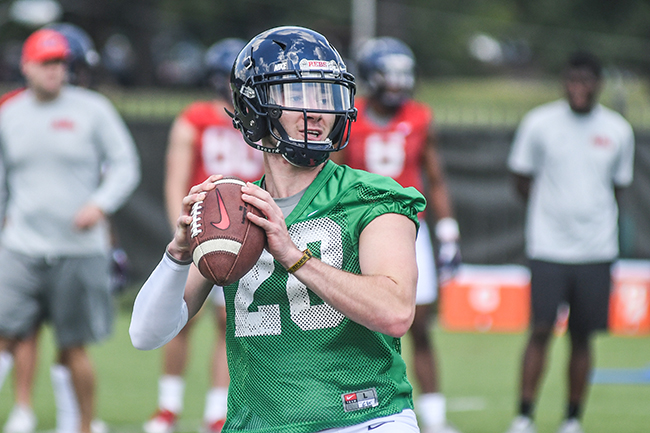 Training camp is in full swing for Ole Miss, which held its second practice Thursday morning.

It was the first practice open to the media, which was allowed to watch the first eight periods. No players or coaches were made available for interviews afterward, but here are some notes from the viewing periods:

— No real surprises along the offensive line. The first-team group consisted of Greg Little at left tackle, Javon Patterson at left guard, Sean Rawlings at center, Jordan Sims at right guard and Rod Taylor at right tackle. Alex Givens worked some inside at guard while Patterson also took some snaps at center.

The second team included Royce Newman, Eli Johnson, Jack DeFoor and Chandler Tuitt, but the Rebels are rotating a lot of bodies early in camp.

— Defensive back Ken Webster, who is practicing despite being suspended for the season opener following his shoplifting arrest earlier this week, took reps at safety during the open viewing periods. Sophomore Myles Hartsfield worked exclusively at cornerback after moving over from safety in the spring.

Middle linebacker Detric Bing-Dukes, who was arrested along with Webster and given the same punishment, took second-team reps with Willie Hibbler on the outside. Redshirt freshman Donta Evans (middle) and DeMarquis Gates (outside) took the first-team reps at linebacker while true freshmen Josh Clarke, Mohamed Sanogo and Zikerrion Baker also got some work.

— All the quarterbacks wore green non-contact jerseys. Alex Faniel will likely redshirt barring something happening to Shea Patterson and other quarterbacks, but the true freshman certainly looks the part, pushing 6-foot-6.

— Running back Eric Swinney moved with no limitations while running and catching passes during drills. Swinney’s first two seasons at Ole Miss have essentially ended before they started because of leg and ACL injuries, but the Rebels have high hopes for the 5-9, 214-pounder if he can stay healthy.

— True freshman Kam White, who was recruited as a safety, took reps with the receivers during the open viewing periods. Fellow freshman D.D. Bowie, the Rebels’ highest-ranked signee, repped at cornerback.

— Cornerback Jalen Julius wore a green non-contact jersey and had a wrap around his left forearm. Julius, who started eight games a season ago, missed most of the spring after fracturing the arm.

— A roster note: Tight end Dawson Knox, who has worn No. 85 the last two seasons, has switched to No. 9. Knox began camp as the No. 1 tight end.

Video from today’s viewing periods is below.