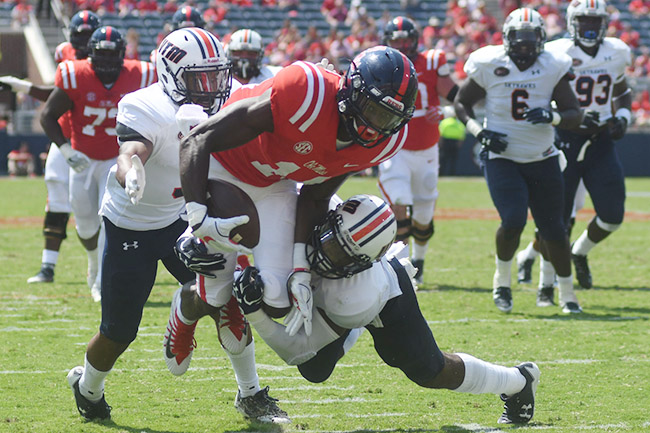 The only surprise would’ve been if Ole Miss lost Saturday.

The Rebels stepped out of the Football Bowl Subdivision and put away a UT Martin team that was much more game than it was two seasons ago in a 10-touchdown laugher. It took a while, but Ole Miss’ speed and athleticism eventually took over inside Vaught-Hemingway Stadium as the Rebels distanced itself in a 45-23 win.

And that’s really all there is to say about it.

Ole Miss is 2-0 in a season where morale is important. Now the Rebels start a three-game stretch that won’t be anything like the last two and will likely be their most important of the season.

All three are on the road starting September 16 with Ole Miss’ first-ever trip to Berkeley to play Cal, which already has a Power-Five notch on its belt with a cross-country win over North Carolina. The Rebels will have a week to heal up before their toughest game of the season at No. 1 Alabama followed by a return trip to the Yellowhammer State to face No. 13 Auburn, which many, including the media based on picking the Tigers to finish second in the division in the preseason, believe will be the Tide’s biggest threat in the SEC West with a difference-maker at quarterback in Baylor transfer Jarrett Stidham.

It’s hard to envision Ole Miss making it through the next month unscathed given its issues (the running game, tackling and coverage at certain spots continue to be sore spots), but the Rebels don’t need to lose all three either.

Because that morale? It can’t be overstated with no championship or bowl game to play for thanks to the penalties the program has already self-imposed as a result of the NCAA’s investigation.

Win or lose, how Ole Miss performs during its road trip will have a lot to do with how the Rebels are feeling about themselves afterward, but the objective has to be to return to Vaught-Hemingway Stadium against Vanderbilt on Oct. 14 with a winning record, which would instill hope for a successful season amid all the outside noise. If the Rebels don’t, there’s a chance things could spiral.

The schedule gets more manageable with Vanderbilt starting a stretch of five of Ole Miss’ next six games at home with the only trip during that span being to Kentucky, but life in the SEC is never easy. The first three of those opponents — the Commodores, LSU and Arkansas — beat Ole Miss by a combined 42 points last season.

It will only add to the difficulty of the job for interim coach Matt Luke if the losses start piling up. Can the Rebels stay motivated during a season in which that motivation is having to be self-generated? It’s easy to say all the right things when things are going well and a lot harder when they’re not.

Can they stay focused knowing there could be more coming from the NCAA probe? Ole Miss’ hearing with the Committee on Infractions begins Monday with a final ruling scheduled to be handed down in early November.

Maybe its big-play offense can help Ole Miss win more than it loses over the next four weeks. Maybe this team is already numb to adversity to the point that it can handle any more that might come its way.

But what happens over the next month — and how the Rebels respond to it — will go a long way in determining the more accurate course of a season that could still veer in any direction.