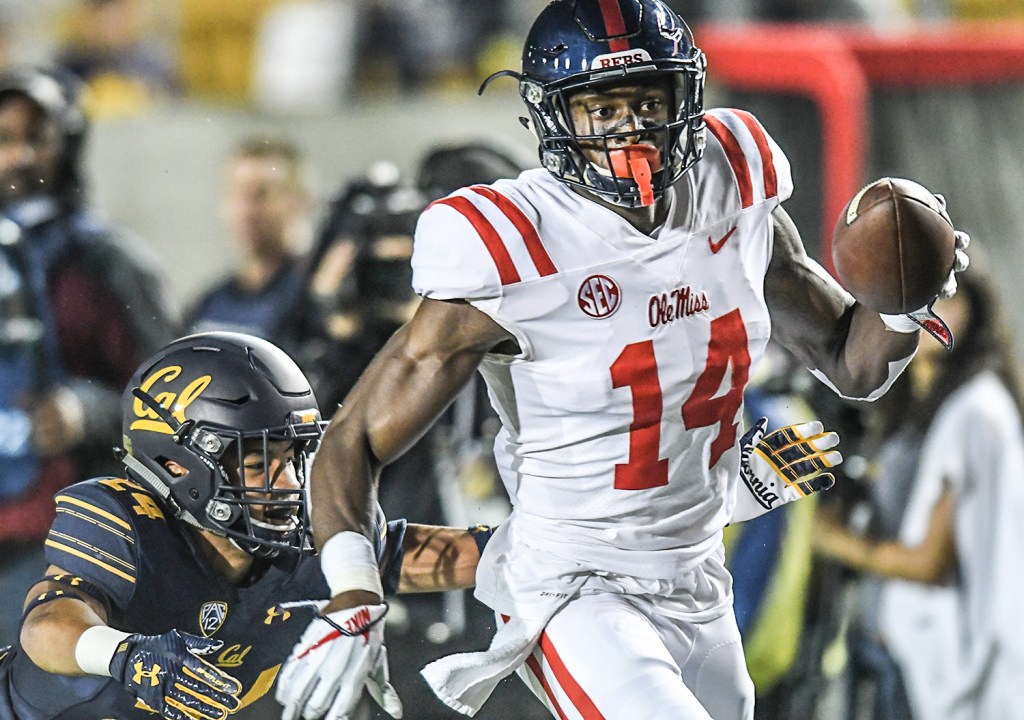 Ole Miss punts for the fifth straight possession, and Cal goes 70 yards in 10 plays to set up Matt Anderson’s 19-yard field goal, giving the Bears their first lead of the second half. Ole Miss has just 59 yards and three first downs in the third quarter. Cal 17, Ole Miss 16, 2:47 3Q

Cal converts a fourth down in Ole Miss territory on its first possession of the third quarter before Ross Bowers finds Vic Wharton III for a 19-yard touchdown. Wharton III beat Montrell Custis to the inside in man coverage to cut into Ole Miss’ lead. Ole Miss 16, Cal 14, 11:16 3Q

The first half ends with Moore’s second interception on a Hail Mary into the end zone on the final play.

Cal gets a fresh set of downs inside Ole Miss’ 10 late in the quarter after a leaping penalty on DeMarquis Gates, but Ross Bowers is intercepted by C.J. Moore at the goal line two plays later to end the threat.

Ole Miss gets the ball back and drives deep into Cal territory before Patterson is intercepted again, this time by Devante Downs at the Cal 21. Both of Patterson’s picks have come off deflections after Patterson tried to fit throws in tight windows.

Ole Miss needs just one play to answer on its ensuing possession with DaMarkus Lodge taking a slant 72 yards for a touchdown. Ole Miss 10, Cal 7, 7:58 1Q

Patterson tries to squeeze a third-down pass into a tight window and is intercepted by Jaylinn Hawkins, who returns it to Ole Miss’ 21-yard line.

Ole Miss gets to Cal’s 5-yard line after a third-down catch by Tre Nixon and a 42-yard completion from Shea Patterson to DK Metcalf, but the Rebels settle for Gary Wunderlich’s 21-yard field goal on their opening drive. Van Jefferson dropped what would’ve been a touchdown on third-and-goal. Ole Miss 3, Cal 0, 12:07 1Q

Ole Miss freshman cornerback D.D. Bowie wasn’t dressed out during warmups. He’ll miss his third straight game after having surgery recently to repair a torn thumb ligament. Cal’s Demetris Robertson, the Bears’ second-leading receiver, is out with an unspecified injury.

Ole Miss’ first game against a Power Five opponent this season will come thousands of miles away from Oxford as the Rebels hit the West Coast today for a late-night matchup with Cal.

Kickoff from California Memorial Stadium in Berkeley, California, is set for 9:30 p.m. CT. The game will be televised on ESPN.

It’s also the first-ever meeting between the schools and the first game ever against a Pac-12 opponent for Ole Miss (2-0). Cal (2-0) beat North Carolina in its opener before knocking off Weber State last weekend.

Check back here for live updates once the game starts.