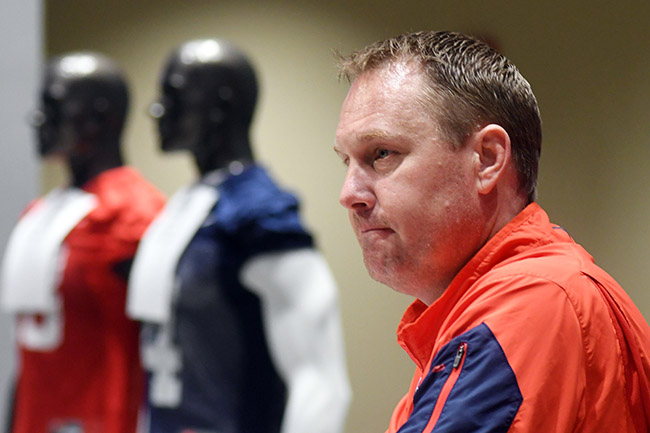 Hugh Freeze has broken his silence.

In his first public statement since abruptly being forced to resign in July, Ole Miss’ former football coach apologized for the events that led his ouster. The apology was issued to RebelGrove.com, an Ole Miss-based affiliate of Rivals.com.

Freeze’s five-year tenure ended this summer after the discovery of a call placed from the coach’s university-issued cell phone linked to a female escort service. A more thorough examination of Freeze’s phone records uncovered what athletic director Ross Bjork called a “concerning pattern” of personal misconduct.

A source told the EAGLE that Freeze made calls to escort services and massage parlors.

Ole Miss is 2-1 under interim coach Matt Luke and has the week off before returning to action next Saturday at No. 1 Alabama.

Freeze’s full apology is below.

While I realize a statement from me could be met with criticism and more negative attention, I believe I owe the Ole Miss family an apology for the pain and disappointment I’ve caused them. With this being an open week for the football team, and with the NCAA hearing behind us, this seemed to be the right time for me to speak from my heart.

As you know, in July of this year Ross Bjork asked me about a concerning number discovered in my phone records. In the days that followed, I shared with him the truth about my past, ultimately resulting in my resignation. It’s a truth I’d already shared with my wife, Jill, and with two of my closest friends months earlier.

While some of the things being reported about the matter are inaccurate, or in some cases completely false, it’s much more important for me to tell you that what I did was wrong, and there’s no justification for me making the selfish decisions that I knowingly made. I know I’ve hurt many people, especially those in the Ole Miss family, and I am asking you to forgive me for what I’ve done. I miss being a part of Ole Miss but will be pulling for our team every Saturday this season. To my faith family, I ask for your forgiveness and appreciate your prayers as well.

I have experienced unbelievable grace from above, from friends, and especially from Jill. Her strength and love through this storm have been incredible. Neither she nor our girls ever asked to live their lives in the public eye, but they have handled this with grace and dignity.

Words cannot express our gratitude for the outpouring of prayers, love, and forgiveness we have received from many of you. We have some incredible memories to hold onto from our time at Ole Miss, and want to thank you for blessing us over the last 5 years. While I realize there’s no good answer for the pain I’ve caused, I hope you can forgive me.