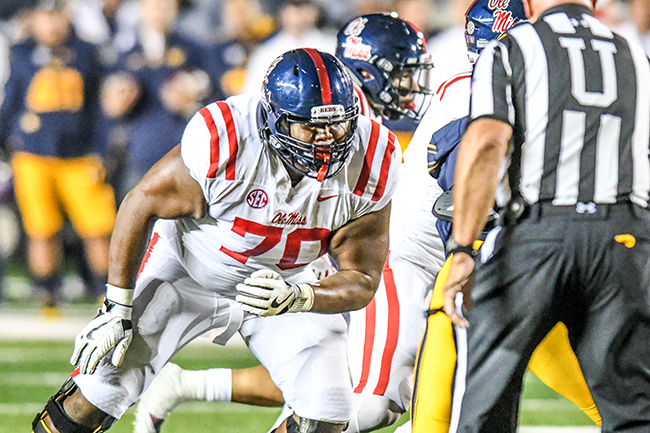 Ole Miss doesn’t have to look far down the line for its center.

The Rebels are preparing for life without starting center Sean Rawlings, who recently had surgery on the left ankle he injured against Cal and likely won’t be available for Ole Miss’ game at No. 1 Alabama on Saturday (8 p.m., ESPN). Backup center Eli Johnson is out for the season with a torn ACL, so the Rebels are turning to the next-closest position to fill the void.

Guards Jordan Sims and Javon Patterson each got reps at the position during the bye week. Patterson has the edge in experience having started three games at center last year and sliding over to fill in for Rawlings in the second half against Cal, but Sims has impressed coaches with his cerebral approach to the game.

Luke said following the loss to Cal that Patterson would be the center should Rawlings have to miss any games. But further evaluation during the open date of exactly how the Rebels want to use the rest of their options up front had the coach changing his tune toward the end of last week.

“If (the week) ended today, I’d go with Jordan because he’s just done a good job in practice,” Luke said. “I’ve been very, very pleased with him.”

That would also allow Luke and offensive line coach Jack Bicknell Jr. to have what they believe are the Rebels’ best five available linemen on the field at the same time with Patterson staying at his more natural left guard spot, where he’s drawn 16 of his 21 career starts. Either Daronte Bouldin or Alex Givens would fill in at right guard should Sims get the nod at center Saturday while Greg Little and Rod Taylor would man the left and right tackle spots, respectively.

Redshirt freshmen Royce Newman and Jack DeFoor would provide depth at guard. True freshman Ben Brown, a converted guard, is another option at center, though Bicknell said Brown’s redshirt would only be burned in an emergency situation.

“We’re just trying to get the best five guys in there,” Bicknell said. “If you deserve to play, we’re trying to get you in because of our tempo. I think that builds depth and it encourages the guys to practice harder and prepare because they know they’ll be in there.”

But Sims, who said he’s fully healthy after dealing with a nagging ankle sprain at the beginning of the season, has been preparing to be Ole Miss’ emergency center since training camp when he got occasional reps at the position. Those reps have increased dramatically the last two weeks to the point that the 6-foot-3, 330-pounder practiced with the first-team offense there at times last week.

“It feels pretty comfortable,” Sims said. “In film every day, I’m always listening to Coach. Different calls for every position, so you never know what could happen. Mentally, I feel like it’s going to be really good. Physically, I’ve got to get used to pushing the tempo and getting everybody all set.”

How long Rawlings will be out remains to be seen, but Luke said he feels like his team has two viable options in the meantime.

“As the center, you’re the field general,” Luke said. “I think Javon and Jordan can both handle that, but right now, I think Jordan and Javon in the game at the same time is key.”