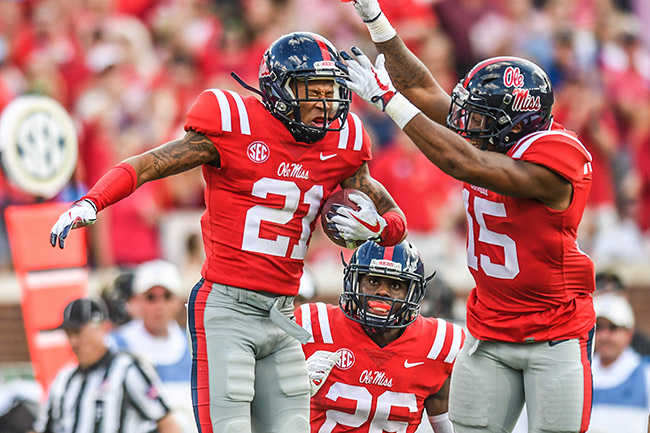 The Rebels get their first touchdown of the game when Jordan Wilkins goes 28 yards. The score was set up when Ole Miss converted a fourth down on the previous play. No. 24 LSU 23, Ole Miss 16 4:11 third quarter

LSU gets their second touchdown of the game, this one by quarterback Danny Etling who runs it five yards for the score. Tigers went 78 yards on 7 plays. No. 24 LSU 23, Ole Miss 9 6:04 third quarter

Patterson came back out to start the second half but is wearing a brace on his right knee.

Ta’amu marched the Rebels down the field and Wunderlich converted a 26-yard field goal. No. 24 LSU 13, Ole Miss 6 Halftime

Patterson went into the locker room early and Ta’amu filled in at quarterback for the final drive of the half.

Patterson has been in the sideline medical tent during the duration of LSU’s possession, which ended in a 38-yard field goal for the Tigers. Jordan Ta’amu has been warming up. No. 24 LSU 13, Ole Miss 3 1:17 third quarter

The tie does not last long as LSU pulls ahead with a seven-yard rush by Derrius Guice. It was set up by a 59 yard run by Guice the previous play. No. 24 LSU 10, Ole Miss 3 4:52 first quarter

Ole Miss marches down the field and ties things up with a 31-yard field goal by Gary Wunderlich. Tight end Dawson Knox had two catches for 18 yards. Ole Miss 3, No. 24 LSU 3 5:53 first quarter

Ole Miss goes three and out after a dropped pass by AJ Brown on third and short. LSU started at their 10 but quickly got to the Rebel five yard-line after a 63 yard catch and run by running back Darrell Williams. LSU is held out of the end zone after a 12- yard sack by Marquis Haynes. LSU connected on a 35-yard field goal. No. 24 LSU 3, Ole Miss 0 10:38 first quarter.

Ole Miss and LSU will meet for the 106th time Saturday when the Rebels host the 24th-ranked Tigers at Vaught-Hemingway Stadium in the latest rendition of the Magnolia Bowl.

It marks Ed Orgeron’s first trip back to Oxford as an opposing head coach after a well-documented disastrous tenure as Ole Miss’ coach in which Orgeron went just 10-25 overall with three SEC wins from 2005-07.

Kickoff is set for 6:15 p.m. on ESPN. Check back here for live updates throughout the game.

Ole Miss (3-3, 1-2 Southeastern Conference) is looking to start just its second winning streak of the season after last week’s win over Vanderbilt. LSU (5-2, 2-1) is looking for its third straight win after rallying from a 20-0 deficit to upset Auburn in its most recent outing.

It’ll be Ole Miss’ top-ranked passing offense in the SEC going against an LSU defense that leads the league in sacks. LSU’s Derrius Guice will be the latest challenge for the Rebels’ 117th-ranked run defense.