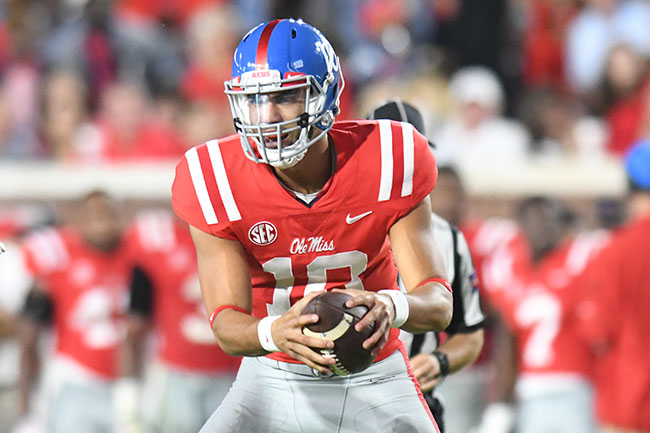 Connor Limpert connected on a 33-yard field goal and Arkansas completes the comeback. Razorbacks were down 31-7 at one point and used a 31-6 rally to win. Arkansas 38, Ole Miss 37 Final

On Ole Miss’ first play of their possesion Eric Swinney fumbled the ball on the hand-off and Arkansas’ Kevin Richardson III picked it up for the scoop-n-score. Ole Miss 37, Arkansas 35 5:11 fourth quarter

During Arkansas’ next possession Kelly fumbled the ball with Ole Miss recovering. Ta’amu hit D.K. Metcalf on a deep ball to get to the Arkansas 11. The drive stalls but Wunderlich hits a 20 yard field goal to cushion the Rebels’ lead. Ole Miss 37, Arkansas 28 9:52 fourth quarter

On a 4th and short, Arkansas opted to not run the ball and instead try a cute play. It did not work and Ole Miss’ defense forced a turnover on downs.

Arkansas comes out of the half and picks up where they left off. Jonathan Nance rattled off a 40-yard run to put the Razorbacks inside Ole Miss territory. Kelley then hit tight end Cheyenne O’Grady on a nine-yard pass for the score. Arkansas is on a 21-0 run. Ole Miss 31, Arkansas 28 10:41 third quarter

There is new life in the game after Kelly hits a wide open Deon Stewart for a 23 yard pass. Razorbacks now down only two scores. Ole Miss 31, Arkansas 21 :13 second quarter

Jordan Ta’amu made his first mistake of the game, throwing an interception to Arkansas’ Josh Liddell. Liddell returned it 54 yards to the OM 21. That is two turnovers in two straight possessions for Ole Miss.

Arkansas’ offense found the end zone again after three punts and a missed field goal. Kelly pulls the ball for a 15-yard run to score. The Razorbacks got over the 100-yard mark on the ground during the drive. Ole Miss 31, Arkansas 14 2:44 second quarter

The Ole Miss offense continues to dominate. The Rebels score on their fifth consecutive drive. Ta’amu picks up his second rushing touchdown of the day on a eight-yard run for the score. He’s at 72 yards on three carries. Ole Miss 31, Arkansas 7 10:51 second quarter

Gary Wunderlich connects on a 37-yard field goal to extend Ole Miss’ lead. Ta’amu had a 15-yard run during the drive to get him to 64 yards on two carries. Ole Miss 24, Arkansas 7 13:03 second quarter

Arkansas got in their own way on the next possession. A trick play went nowhere and Kelly tripped on his center for a loss. The Razorbacks then missed a 45-yard field goal attempt.

Ole Miss’ defense held for the first punt of the game. Jordan Ta’amu then showed off his running ability, going 49 yards on the QB keeper for the score. Ole Miss 21, Arkansas 7 4:17 first quarter

Defense is not high on the priority list early. Ole Miss’ second possession went two plays longer than their first. After two passes by Ta’amu to get the Rebels inside the Arkansas five yard-line, running back Eric Swinney took care of the rest. Ole Miss 14, Arkansas 7 6:44 first quarter

The Razorbacks responded with a lengthy opening drive that went 70 yards on 13 plays and took over six minutes. Quarterback Cole Kelly completed a 12-yard pass to Devwah Whaley for the score. Arkansas picked up 48 of those yards on the ground against a porous Ole Miss run defense. Ole Miss 7, Arkansas 7 7:55 first quarter

Arkansas won the toss and deferred. Ole Miss and Jordan Ta’amu started with the ball and only needed two plays to score. Running back Jordan Wilkins ran 64 yards for the score. Ole Miss 7, Arkansas 0 14:24 first quarter

Ole Miss concludes its three-game homestand today with a morning kickoff against Arkansas at Vaught-Hemingway Stadium.

The Rebels (3-4, 1-3 SEC) are coming off a 40-24 loss to LSU. It will be the first start for quarterback Jordan Ta’amu in place of the injured Shea Patterson. Arkansas (2-5, 0-4) has lost three straight games, including a 52-20 home loss to Auburn last week that kept the Razorbacks in last place in the SEC West.

Kickoff is set for 11 a.m. Check back here for live updates throughout the game.