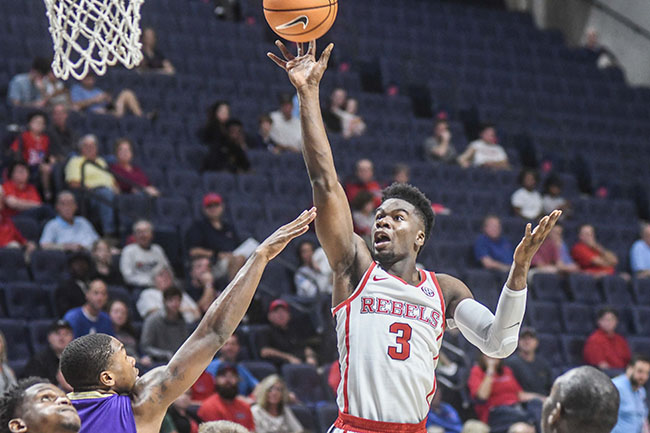 Ole Miss men’s basketball coach Andy Kennedy has 10 scholarship players at his disposal, and he plans on taking his time figuring out exactly how he wants to use each of them this season.

Ideally, Kennedy would like to get his rotation closer to eight, but he said there are more than that vying for substantial minutes as the Rebels head into Friday’s 7 p.m. season opener against Louisiana at The Pavilion. Kennedy is in no rush to cut down on some of the Rebels’ newfound depth.

“It just depends on who’s playing well,” Kennedy said. “Right now, I think it’s pretty safe to say that nine of them are really, really battling to see who can be in the upper eight of that rotation. I think that will work itself out.”

The starting lineup for the Rebels’ exhibition win over North Alabama on Sunday didn’t feature many surprises other than perhaps Marcanvis Hymon getting the nod at power forward over newcomer Bruce Stevens, an indication of the kind of experimentation Kennedy could be trying with different lineups early in the season. Either Hymon or fellow forward Justas Furmanavicius — the two combined for more than 11 rebounds per game last season — starting alongside 7-footer Dominik Olejniczak gives the Rebels a more defensive presence inside while the 6-foot-8 Stevens, an NJCAA All-American at Jones County Junior College last season, will give the Rebels more offense with his ability to stretch defenses with his touch from deep (37.5 percent from 3-point range last season) when on the floor.

The Rebels’ frontcourt depth took a hit recently when Karlis Silins tore the ACL in his left knee for the second time in as many seasons, but Kennedy still likes the complementary skill sets Ole Miss has there.

“We’ve still got four good post guys,” Kennedy said. “With rotations, it makes you hold your breath a little bit. You’ve got to get through a long season with four guys in there.”

Ole Miss could even go small with a backcourt as deep and versatile as any Kennedy’s had in his 12 years in Oxford with Memphis graduate transfer Markel Crawford, four-star signee Devontae Shuler and international guard Ilya Tyrtyshnik joining point guard Breein Tyree and wings Terence Davis and Deandre Burnett, the Rebels’ leading scorers last season. Crawford is an athletic slasher who should provide instant offense (more than 12 points per game last season at Memphis) and better perimeter defense while Shuler is already receiving praise as the Rebels’ best on-ball defender from Kennedy and his teammates, though the freshman scored 18 points in just 23 minutes in the exhibition and could carve out a larger role on offense if that continues.

Mixing and matching lineups isn’t an uncommon practice for most teams early in the season as they try to figure out what works best, but Burnett said it shouldn’t take much getting used to if each player sticks to his respective strengths while on the floor.

“You know what you were brought in to do,” Burnett said. “AK tells us to do what we were recruited for whether that’s to rebound, score, block shots. That’s your role and that’s how you establish your rhythm.”

Louisiana will immediately test the Rebels with its experience. The Ragin’ Cajuns, who won 21 games last season, return seven of their eight leading scorers from a season ago, including senior guard Frank Bartley and his team-best 16.6 points per game.

They’ll be the first to see an array of looks from Ole Miss, which is trying to get back to the NCAA Tournament for the first time since 2015.

“I think (our players) are all versatile and complements to one another,” Kennedy said. “I don’t think any two players are the same.”

Watch Kennedy talk about the rotation, Louisiana, what he learned from the exhibition win and more in the video below.