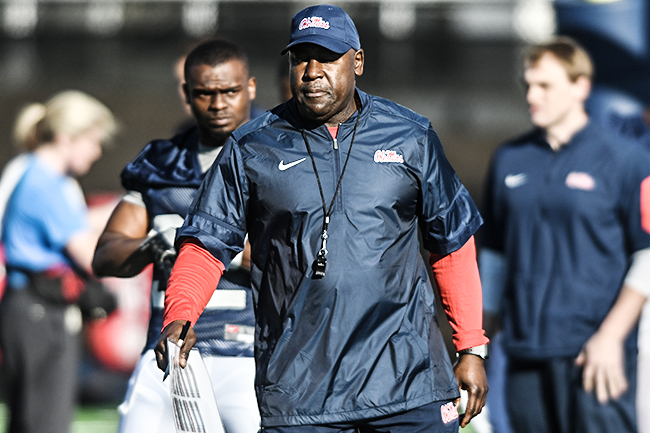 Regardless who’s coaching on the field with Matt Luke at Ole Miss next season, they’ll collectively make a nice chunk of change.

Ole Miss’ assistant salary pool is set to increase to $5,135,500 next season, money that will be spread among the Rebels’ 10 on-field assistant coaches. The increase in the sum from previous years makes the amount one of the wealthiest assistant pools in the nation.

Ole Miss’ salary pool for assistants was $4.3 million in 2016 and jumped nearly $400,000 this season with then-head coach Hugh Freeze bringing in five new assistants before his abrupt resignation in the summer. The push past $5 million would’ve ranked in the top 5 nationally heading into this season, according to USA Today’s assistant coaches salary database.

Who exactly will be getting that money for Ole Miss next season is uncertain. Matt Luke had the interim tag removed earlier this week and said he’ll “evaluate everything” within the program as the Rebels’ permanent head coach, including his coaching staff.

Defensive coordinator Wesley McGriff, offensive coordinator Phil Longo, linebackers and special teams coach Bradley Dale Peveto, defensive line coach Freddie Roach and receivers coach Jacob Peeler were Freeze’s hires. McGriff just finished the first of a three-year, $3.2-million contract that would increase his annual base salary from $1 million to $1.1 million on Jan. 1, 2018 while Longo is in the midst of a two-year, $1.3-million deal that would bump his annual pay from $600,000 to $700,000 on the same date.

Peeler and offensive line coach Jack Bicknell Jr., who was brought in by Luke once he took over on an interim basis in July, are on one-year deals. Peeler, whose contract ends March 31, 2018, made $375,000 this season.

The Rebels’ staff could look much different next fall depending on what Luke decides to do, but he’ll add another assistant regardless. The NCAA Division I Council adopted legislation in the spring that will allow FBS teams to hire a 10th on-field assistant beginning Jan. 9, 2018.

Luke said he’ll look to use that hire on the defensive side of the ball.