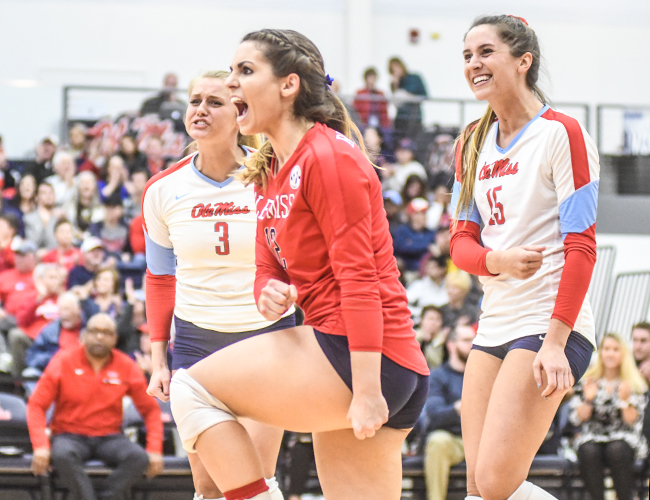 Before his Ole Miss volleyball team took the court Tuesday, Steven McRoberts told his players the outcome of the program’s first-ever championship match wouldn’t change how he felt about a historic season.

Once it was over, it was hard for the Rebels’ fourth-year coach to keep those feelings in check.

“Them handing us the bigger trophy, we smiled a lot more and we celebrated a little bit more,” McRoberts said with a grin.

Ole Miss capped the best season in school history with a 25-17, 25-15, 25-19 win over Texas Tech inside a packed Gillom Center to win the National Invitational Volleyball Championship. It’s the first postseason tournament title of any kind for the Rebels (22-14), who won it in just their fourth postseason appearance of all-time and first since 2010.

“Leaving a champion, even though it was only the NIVC, we worked so hard and everyone played so well and phenomenal in this tournament,” senior outside hitter Kate Gibson said. “Leaving this team as a champion feels better and more than I could’ve ever asked for.”

With its sixth straight win, Ole Miss tied the program record for wins in a season in the 25-point era, the final milestone in a season full of them. The Rebels, who had never won a postseason match before this season, also set single-season records for blocks, kills and digs while setting multiple individual records.

Ole Miss won 17 regular-season matches to earn an NIVC bid after being picked in the preseason to finish 12th in the 13-team Southeastern Conference. The Rebels won four more, including a 3-0 sweep of West Virginia in the semifinals, to advance to the final against the Red Raiders, who came in winners of four straight.

But much like the rest of Ole Miss’ tournament opponents, Texas Tech was overwhelmed. Ole Miss quickly claimed the first set and never came close to losing that momentum even with senior outside hitter Lexi Thompson having to be subbed out at one point in the second set after suffering a minor asthma attack with Ole Miss holding a 12-9 lead.

The Rebels reeled off 11 of the set’s next 13 points for a 23-11 lead on the way to the 10-point win. Ole Miss built a 24-17 lead in the third set and withstood a couple more points from Texas Tech before tournament MVP Emily Stroup finished the Red Raiders off with her 17th and final kill in front of the 1,012 in attendance — the largest crowd to take in a match at the Gillom Center this season.

“I knew we only had a few games left, and going into every one, we had to think of it as this could be our last game,” Stroup said. “It is a process, and we finally started clicking and playing really well together. We all just wanted to win.”

Stroup, who set the school’s single-season kills record this season, added 11 digs for her 14th double-double of the season. Gibson had 15 digs and nine kills while Thompson re-entered the match later in the second set to finish with 12 digs and nine kills.

“I took my inhaler, and it was fine,” Thompson said. “I just wanted to go back in and act like it didn’t happen because I hated being out. You know it’s your last game no matter and you’re just watching from the sideline, it’s really hard.”

Caroline Adams, who joined Stroup and Gibson on the all-tournament team, had a match-high 16 digs, breaking the school single-season for digs in the process.

It all helped Ole Miss the finish the best way it could despite not making the NCAA Tournament for the seventh year in a row. Getting back there is the ultimate goal for the Rebels, who’ve turned in four straight winning seasons, and McRoberts believes Tuesday was further proof that his program is getting close.

“You get in this tournament and you want to win it, but hopefully next year we can play like this earlier so we get a few (quality) wins,” McRoberts said. “We had five heartbreaking losses in the season that I can think of just off the top of my head, and we may be talking about the NCAA Tournament versus the NIVC if that were to happen. Our No. 1 goal is to use this to springboard us.”

Ole Miss working through ‘combination’ of problems amid losing…