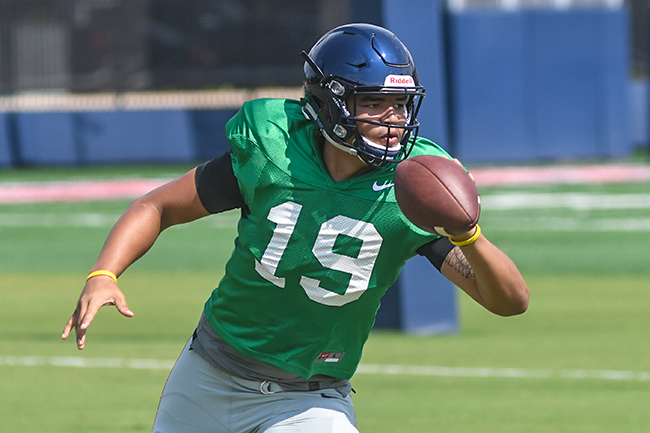 Ole Miss’ offense didn’t skip much of a beat this past season without Shea Patterson.

Patterson’s torn PCL against LSU seven games in forced Jordan Ta’amu into action with the junior college transfer picking up where his predecessor left off for the SEC’s top passing offense. Ta’amu completed nearly 67 percent of his passes for 1,682 yards and 11 touchdowns with four interceptions while adding 164 yards and four more scores on the ground, helping the Rebels to a 3-2 record over their final five games and sparking conversation about a competition with Patterson to be the starter next season.

That won’t be happening with Patterson announcing earlier this week his intention to transfer to Michigan, officially ending the Patterson era after 10 games and leaving Ta’amu at the top of the depth chart heading into the spring. How Ta’amu performs over the course of a full season remains to be seen, but how does Patterson’s pending departure affect what’s left behind Ta’amu?

With Patterson out, that leaves only one other scholarship quarterback other than Ta’amu on the roster — two if you count Jason Pellerin, who served as Chad Kelly’s backup in 2015 but was moved to receiver in the spring before going back to quarterback when Patterson hurt his knee as an insurance policy.

Pellerin didn’t get any snaps at his old position but was listed as Ta’amu’s backup on Ole Miss’ official depth chart by season’s end and could stay at quarterback with the Rebels short on experienced options. Freshman Alex Faniel redshirted after signing with Ole Miss as a three-star recruit and the nation’s No. 39 pro-style quarterback prospect, according to 247Sports.com’s composite rankings. Walk-ons Grant Restmeyer and Graham Lindman haven’t played a down at Ole Miss.

Ole Miss is trying to add to its quarterback room through recruiting, but the Rebels don’t yet have a signal caller verbally committed in their 2018 class.

Whether Ole Miss is able to land Corral, Tune or another prep signal caller or has to jump back into the junior college market, the Rebels will look to sign at least one quarterback during this recruiting cycle to help at a position short on numbers and experience heading into the spring.