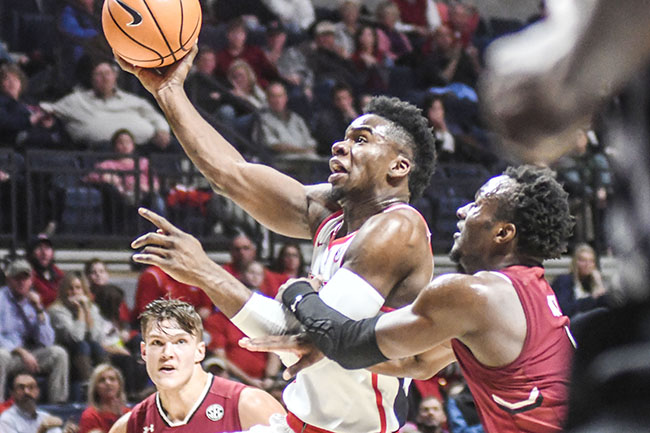 Ole Miss is taking some momentum on the road.

The Rebels head to Athens, Georgia for their first road tilt in Southeastern Conference play tonight against Georgia (5:30 p.m., SEC Network). Ole Miss (8-5, 1-0 SEC) is coming off a 74-69 win over South Carolina in its league opener for its third straight victory and will try to match its longest winning streak of the season against the Bulldogs (9-3, 0-1).

It’s another chance at a quality win from an RPI standpoint for Ole Miss, which is in desperate need of them to start putting together a resume worthy of NCAA Tournament consideration after a non-conference schedule full of missed opportunities. The Rebels notched their first RPI top-100 victory against South Carolina and will go for another against Georgia, which comes in at No. 60 in the NCAA’s latest RPI rankings.

It’s been an up-and-down season to this point for Georgia, which owns three top-100 RPI wins but also has a sub-150 loss to UMass. The Bulldogs put up a fight against No. 17 Kentucky at Rupp Arena their last time out before falling 66-61.

Where the Bulldogs will test Ole Miss the most is on the interior with senior forward Yante Maten, the preseason co-SEC Player of the Year. The 6-foot-8 Maten is averaging 19.9 points and 9.5 rebounds a game and had 17 and 12 against the Wildcats.

Ole Miss held on against South Carolina despite finishing minus-13 on the glass. The Rebels rank 242nd out of 351 Division I teams in rebounding margin (minus-0.8) with senior forward Marcanvis Hymon (6.3 per game) leading the Rebels in that category.

Defense has also been a crutch for the Rebels for most of the season, but it’s been better of late. The Rebels, who are allowing 76 points a game, are yielding just 63.6 points during their winning streak.

Better on-ball defense has spearheaded that improvement, something Ole Miss will need to continue against a Georgia team averaging nearly 79 points at Stegeman Coliseum.

“Making it hard for them. For us, every team that’s beat us or we’ve had a close game with, we’ve just been letting them get whatever they want,” senior guard Markel Crawford said. “They’ve been getting to their spots too comfortably. For us, a point of emphasis is getting in guys, being the first to punch and being the tougher team.”

Ole Miss also held off South Carolina without much contribution from Terence Davis because of foul trouble that was an issue for the junior guard much of last season. Coming off a season-high 25 points on 9-of-14 shooting against Bradley before Christmas, Davis, who’s averaging 15.2 points, had just four points and five rebounds in 19 minutes against the Gamecocks before fouling out late.

Ole Miss can’t count on pulling out many wins when their leading scorer can’t stay on the floor, and head coach Andy Kennedy knows it.

“We had that issue last year,” Kennedy said. “He didn’t have it in our game against Bradley when he made shots, and we kind of got out and stayed in front. But we need him in the game.”