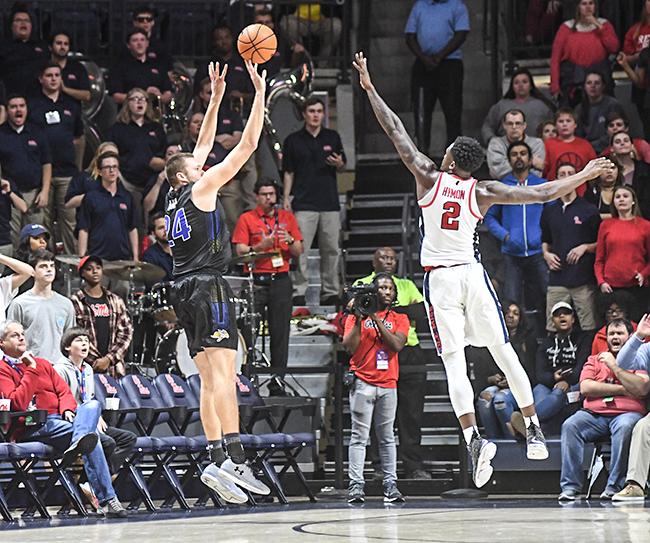 There are still nearly three months worth of games left to play, so maybe all the preseason chatter turns out ultimately to be right.

But talk from Ole Miss coach Andy Kennedy and his players about how the defense would improve from last season has proven to be empty through the Rebels’ first nine games.

It’s the primary reason Ole Miss (5-4) has lost nearly half its games to this point despite averaging nearly 81 points itself. The Rebels have surrendered more than 85 points a game in their losses with most of their struggles coming against the better teams on the schedule.

Ole Miss allowed more than 86 points a game during the three-game losing streak it snapped with Wednesday’s win over Sam Houston State. Those losses came to South Dakota State, Virginia Tech and Middle Tennessee State — all top-100 RPI teams — with SDSU going for 99 points in its overtime win at The Pavilion on Nov. 28.

“The three-game losing streak we were coming off of, I think our defense was real poor,” senior guard Markel Crawford said.

So why is Ole Miss having so much trouble stopping teams from scoring with a roster that Kennedy has deemed more athletic than what the Rebels had last year?

“I just think that when we get hit with some in-game adversity, we’re fracturing,” Kennedy said. “We’re not being as concise as we need to be. I think our anticipation has to be better.

“Our anticipation, our concentration, our urgency. I hate to be so redundant, but that’s what is screaming at me. We’re just not as urgent as we need to be.”

The issues start on the perimeter despite additions that were supposed to help the Rebels offer more resistance there. Crawford, who had 46 steals at Memphis last season, and freshman Devontae Shuler, who received praise from coaches and teammates in the preseason as the Rebels’ best on-ball defender, joined a backcourt that returned Terence Davis, Deandre Burnett and point guard Breein Tyree.

Yet teams haven’t had much trouble breaking down Ole Miss’ defense, either getting all the way to the rim off the bounce or drawing help-side defenders to get another open shot from close range. Opponents are shooting at a 49-percent clip against the Rebels inside the 3-point line while the Rebels aren’t having much success taking the ball away, forcing just 12.4 turnovers a game, which ranks 282nd nationally.

Crawford said keeping teams out of the lane has been an emphasis at practice, but he agreed with Kennedy that the mental approach is just as much to blame for the defensive lapses as anything physical.

“I think for us it’s just the will to guard. It’s not on anybody but us,” Crawford said. “Coming out, it’s that desire to keep your man in front of you and just thinking, ‘He’s not scoring on me.’ I think we can do a better job with that and having pride in defending.”

Dominik Olejniczak has altered shots on the interior with his 7-foot frame but hasn’t been the kind of rim protector Kennedy envisioned before the season started. The Drake transfer has two blocks and is averaging just 2.1 rebounds as his playing time has gradually decreased in favor of junior college transfer Bruce Stevens, a natural forward who’s started the last two games at center in Olejniczak’s place.

The 6-8 Stevens has averaged nearly 12 points in those starts, but Kennedy is having to sub in Olejniczak for defense with Stevens still trying to catch up in that area of his game. Senior forward Marcanvis Hymon has been the closest thing to a consistent defensive presence inside, leading the Rebels in blocks (15) and rebounds (7.3 per game).

But Ole Miss needs a collective effort if it’s going to stop teams from getting consistent buckets.

“Our biggest issue is defensively,” Kennedy said. “We have to sit down and guard.”