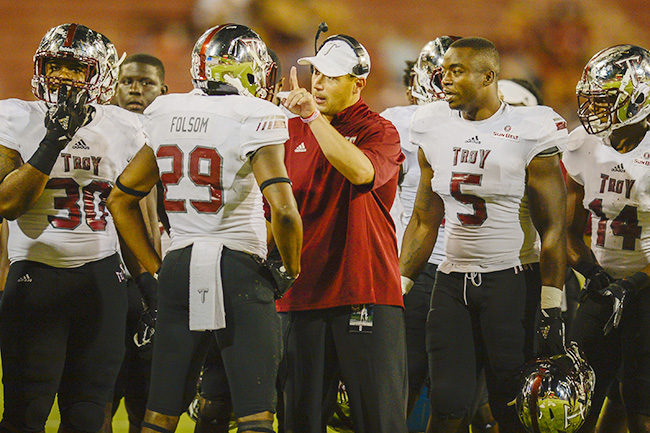 Sumrall, who’s got more than a decade of experience as a college position coach and coordinator, spent the last three seasons in the same capacity at Troy, doubling as the Trojans’ special teams’ coordinator. Troy finished the 2017 season in the top 25 nationally in run defense (7), sacks (7), scoring defense (11), turnovers forced (16) and total defense (24) a season after finishing second nationally in interceptions, fourth in turnovers forced, 17th in run defense and 21st in scoring defense.

Sumrall joined Troy’s staff after a three-year stint at Tulane as co-defensive coordinator. The Green Wave finished the 2013 season second nationally with 35 forced turnovers, 13th in sacks per game, 11th in red-zone defense and 22nd in total defense.

“Coach Sumrall became a defensive coordinator at a young age and has led turnarounds on that side of the ball everywhere he has been,” Luke said in a statement. “He is a relentless recruiter and gets the very best out of his players. His passion, energy and toughness make him a great fit for our staff, and we can’t wait to get him on campus.”

Before joining Tulane’s staff, Sumrall spent five seasons on staff at the University of San Diego, including the last two as defensive coordinator. San Diego led the nation in scoring defense in Sumrall’s first season as coordinator in 2010 and ranked fourth in sacks and 15th in run defense in 2011.

Sumrall spent the 2005-06 seasons as a graduate assistant at Kentucky, where he was a three-year letterwinner as a linebacker from 2002-04.