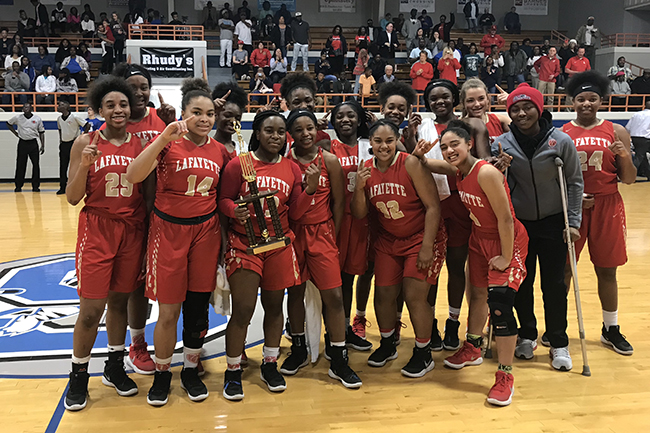 SALTILLO — On Friday night, Lafayette needed a win and it had nothing to do with a basketball.

Only 24 hours earlier the Commodores and the Oxford-Lafayette community were dealt a horrific blow as Oxford Intermediate School teacher Sherry Buford was killed in a car wreck in Mooreville on her way home from watching a basketball game at Itawamba Community College on Thursday night.

Lady Commodore standout Azariah Buford was in the car, along with her grandmother and two other passengers.

Leading up to Lafayette’s 2-5A championship game against host team Saltillo on Friday, Commodore head coach Shayne Linzy wondered if they should even play the game.

The game went on as scheduled and the Commodores (22-6) came away with the 41-31 win in what Linzy viewed as one of the more emotional games he’s ever been a part of. The win gives Lafayette a bye until the second round of the MHSAA Class 5A state playoffs, which will be held on Feb. 23, and just one win away from reaching Jackson and the state tournament.

Lafayette had to go on without Buford, who suffered a dislocated hip and one staple put in her head. Even with all the physical injuries and the emotional trauma of losing her aunt, Buford showed up just prior to the game on crutches and cheered her teammates on.

“We knew we were coming to the host school’s gym and playing them. They’ve got a great fan base as you witnessed tonight then you add of course the things that happened to us,” Linzy said. “Seeing them pull that out the way they did, I could not be any prouder of any team I’ve ever coached. It’s really a lot of guts. …very emotional game.”

After a back-and-forth first half which saw the Commodores take a 26-25 edge into halftime the second half was a much different story for both teams.

Lafayette’s defense clamped down, holding Saltillo (12-15) to only six points in the final 16 minutes. The Commodores stifled the Tigers and clogged up the driving lanes that Saltillo had taken advantage of in the first half.

“We wanted to stop the penetration,” Linzy said. “We wanted to do a better job of getting off the screens and allowing our defenders to get through screens because (Saltillo) was killing us off them. …this Saltillo team, with what they were doing, set really, really hard screens and it frustrated us in the first half.”

The Tigers will host either Cleveland Central or Holmes Central in the first round of the 5A playoffs on Monday.