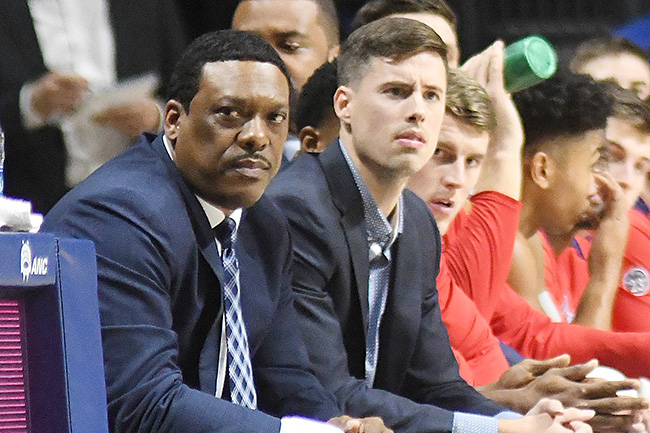 Andy Kennedy hinted this could be coming following Ole Miss’ loss to Arkansas last week, one that extended the Rebels’ losing streak to six at the time — the program’s longest since the 2005-06 season — and had Kennedy apologizing for the state in which the program found itself.

“I told (athletic director) Ross (Bjork) that if we felt like the product that is Ole Miss would get better, I would walk away right now and never to be heard from again on this campus if that’s what this team needs,” Kennedy said then. “And maybe that’s what it needs.”

That was a day after Kennedy announced his resignation effective at the end of his 12th season, a move he thought would liberate his players amid talk about their coach’s job status that’s been constant since last spring when Chancellor Jeffrey Vitter decided not to roll over Kennedy’s contract. Instead, the Rebels lost by 11 to the Razorbacks and by 17 at Mississippi State on Saturday.

Less than 24 hours later, Kennedy announced he was stepping down immediately, leaving interim coach Tony Madlock, an assistant on Kennedy’s staff the last four seasons, with the unenviable task of trying to hold together a team that’s lost seven in a row with motivation becoming harder to come by as the losses pile up.

“It’s a tough situation, especially for the guys,” Madlock said. “You’ve been doing something and hearing the same voice all year, and now a new voice comes in. It’s something that we’ve got to deal with. We can’t change it. We’ve just got to move forward.”

It’s a clean break players agreed needed to be made with four games left in the regular season starting with a trip to Missouri (18-9, 8-6 SEC) on Tuesday (8 p.m., ESPN2). The Rebels (11-16, 4-10), whose skid has dropped them to the SEC cellar, will need an unlikely run to next month’s SEC Tournament championship to be a part of any kind of postseason.

“In my opinion, it just almost brought a bigger magnifying glass on us,” point guard Breein Tyree said. “Our emotions were all over the place last week, and you could kind of see it on the floor.”

As for why Ole Miss’ season has taken a nosedive, Tyree said there’s been a lack of trust between players and coaches since all the losing started. The sophomore cited his last-second 3-point attempt at Texas A&M — one that went halfway down before popping out as the Aggies hung on for a 71-69 victory — as the turning point, adding, “If that shot goes in, maybe we have a whole different season.”

Ole Miss has lost nine of 10 since then, putting the Rebels in line for their first losing season since that 2005-06 campaign. Tyree said he felt the players’ confidence in Kennedy started to dwindle and vice-versa.

“If you don’t believe in your guys and your guys don’t believe in you, that connection is big to me in basketball,” said Tyree, who added he’ll wait to see who Ole Miss hires before deciding whether or not to transfer. “I think that was a problem on this team, and hopefully we can work it out.”

Tyree said there needs to be a different level of accountability for players and coaches as the program moves into a new era.

“We’ve just got to be held accountable for our actions on and off the court,” Tyree said. “That’ll be evident on the court because a lot of our problems are discipline problems — taking bad shots, not running all the actions through and kind of letting one problem fold on to another. In my opinion, it’s a combination of everything honestly.”

Madlock and senior forward Marcanvis Hymon said they haven’t sensed trust as an issue. Hymon’s theory is that players have gotten caught up in individual stats rather than focusing on the success of the team.

“When you start losing, people kind of space out. But I don’t think trusting was the problem,” Hymon said. “I just feel like everybody kind of had their own agenda and kind of went away from what we were trying to reach. That was to win.”

Madlock pointed to the negativity and doubt that inevitably creep in with this much losing.

“That’s when you start doubting your coaches and teammates, and it just happens,” Madlock said. “I don’t think there’s any trust lost. I just think we got on a losing streak and now we’ve got to try to find a way to get out of it.”

What lies ahead beyond this season for Madlock and Ole Miss’ other two assistants, Rahim Lockhart and Todd Abernathy, is uncertain with Kennedy out, though Madlock said he’ll worry about the future later as he tries to help Ole Miss finish its season on a different trajectory.

“I’ve seen a little bit of it all. I’ve been through a little bit of it all,” said Madlock, a Memphis native who’s also spent time at an assistant at Arkansas State, UTEP and Auburn. “It’s one of those deals where you take it, you trust everything you’ve learned from all the head coaches I’ve worked under, and you just go with it.”

As bad as things have been, everybody insisted the Rebels won’t quit trying.

“We’re going into every game trying to win, especially me myself,” Tyree said. “Against Missouri, I’m going to be as aggressive as I’ve probably ever been this season so just I can prove people wrong that we’re not laying down. The season’s not over.”