Where is athletic director Ross Bjork in his search for Ole Miss’ next basketball coach? 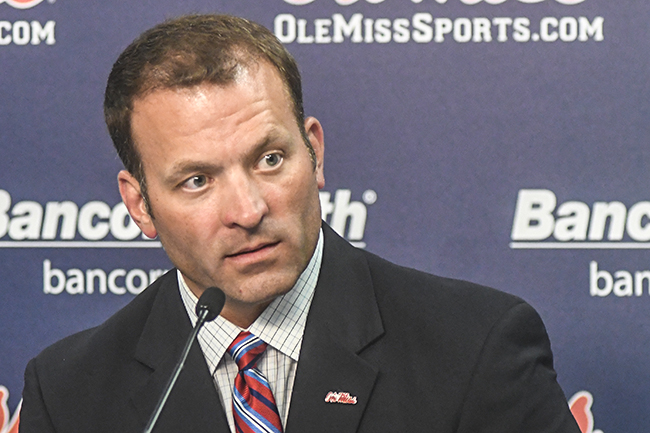 Ole Miss’ men’s basketball team is heading to the SEC Tournament where, barring the unlikeliest of runs, the Rebels’ season will end before the week does amid a cloud of uncertainty as it pertains to the future.

Ole Miss’ athletic director has a head start in his search for the Rebels’ next coach after Andy Kennedy resigned Feb. 18 in the midst of the program’s first losing season since 2006. Saturday’s loss to Vanderbilt in the regular-season finale secured a last-place finish in the SEC for the Rebels, who enter the tournament on a three-game losing streak.

So where does the search stand?

“Right now, we’re active,” Bjork said by phone Tuesday while traveling to St. Louis, where Ole Miss will face South Carolina in the tournament’s first round Wednesday at 8:30 p.m. (SEC Network). “Still kind of the same place in terms of being active and being engaged in the marketplace. Talking to a lot of people about this opportunity and getting great feedback about the upside of this job and the resources that are in place here to succeed in basketball.”

Bjork said it’s been “kind of a whirlwind” the last two weeks talking to candidates and representatives. Asked how many candidates he’s reached out to either directly or indirectly, Bjork said, “I couldn’t even tell you.”

The school has hired Atlanta-based firm Ventura Partners to help with the search, a move Bjork said he felt was needed in order to maximize both the access and vetting process of candidates.

“Because we’re obviously kind of ahead in the marketplace, you need your search firm to make contact with the right people and to analyze the landscape for you and to do a lot of background work that maybe we can’t,” Bjork said. “It’s a great tool and a great resource, and in today’s world with all this stuff happening in men’s college basketball, I think you need that buffer. You need somebody that has really strong ties in the game of basketball to get as much information as you can.”

Perhaps the sport’s biggest storyline this season is off the court with an FBI investigation that surfaced in the fall. Assistant coaches at Southern Cal, Oklahoma State, Arizona and Auburn were among 10 people indicted on bribery charges.

The investigation expanded in February when a Yahoo! Sports report cited documents linked to the years-long probe allegedly showing impermissible benefits ranging from free meals to tens of thousands of dollars worth of payments given to players at some of the nation’s blueblood programs, including Duke, North Carolina, Kentucky, Texas and Michigan State.

Bjork said there’s no timetable on when he’d like to make a hire but acknowledged the possibility of more high-profile programs joining Ole Miss in a search for a new coach could expedite the process.

“One, you’ve got to do your research and your background check on your candidates. Obviously that’s one piece of it to make sure they’re not involved in this stuff,” Bjork said. “The second piece of it is what does the market look like? Are there going to be openings because of this? I think the fact that we’re out ahead helps us and I think puts us in a great position to strike on the right person maybe sooner rather than later.”

There’s been no shortage of speculation as to who Bjork may be targeting.

Bjork wouldn’t talk about specific candidates but said whoever ultimately gets the job needs to be able to unite a fan base that’s become apathetic with the losses mounting. Ole Miss’ average home attendance this season was 6,882 at the $96.5-million Pavilion, which seats 9,500. By the time Senior Night rolled around Saturday against Vanderbilt, Ole Miss was playing in front of a half-empty arena.

“We always say that our job is to put (our players) in the best position to succeed, and that environment is not putting them in the best position,” Bjork said. “You look at it from that perspective, and I felt bad for our players that they wanted sort of a better script to be written for them and their career here at Ole Miss.”

Does that vault a high-profile coach like Matta, whose accomplished resume would instantly generate excitement among the fan base and rejuvenate ticket sales, to the top of the list? Bjork said that would be ideal, but he’s not ruling anybody out.

“It could be somebody with a recruiting platform. It could be style of play,” Bjork said. “It could be experience. It could be personality. Obviously in the SEC, if you can attract a sitting head coach or somebody that’s done it before, then that’s always going to be your first objective. But there are a lot of variables that can unite the fan base. We’re looking at a wide range of all those things.”

Hiring a coach with those kind of credentials would almost certainly cost Ole Miss more than the $2,050,000 Kennedy made this season, but Bjork said the school is willing to pay “whatever we need to” for the right candidate with greater expectations for the program moving forward in an improved SEC, which could send more than half its teams to the NCAA Tournament for the first time ever.