Ole Miss linebackers coach Jon Sumrall: Much-maligned group has ‘more than enough ability for us to be successful’ 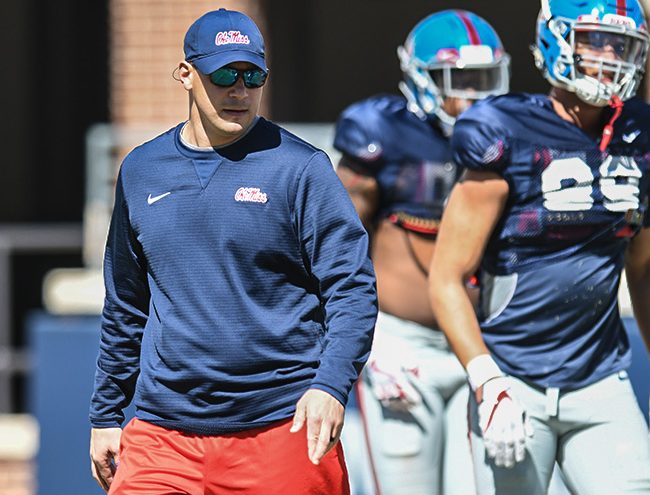 Jon Sumrall has his work cut out for him.

Ole Miss’ first-year linebackers coach took over what’s been the Rebels’ most maligned position the last few years when he was hired in January to replace Bradley Dale Peveto, whose stint as an Ole Miss assistant lasted just one season before leaving to join Jimbo Fisher’s staff at Texas A&M. Sumrall also doesn’t have the luxury of working with what had been by far the most productive member of the group in DeMarquis Gates, who’s out of eligibility after leading the Rebels in tackles each of the last three seasons.

It’s still a feeling-out process for Sumrall and his linebackers, but those who are still around have made a positive first impression on their new coach.

“They’re eager, they’re working. I like all of them as people,” Sumrall said. “I think they’re all committed to try and be the best they can be. They’re still learning how to be consistent day in and day out. Just trying to teach them the basic fundamentals from the ground up. The small things that people take for granted like formation recognition, backfield sets and identification and those things, but those guys are working.”

Ole Miss has to replace both starters in the second level of coordinator Wesley McGriff’s 4-2-5 scheme with Tayler Polk gone from the middle after notching the second-most tackles (39) among the group last season as a walk-on, highlighting the lack of consistent production at the position. No other linebacker had more than 24 tackles last season for a defense that finished 109th nationally in points allowed, 115th in total defense and 123rd against the run.

“We know we were (next to) last (in the SEC) in run defense and had a hard time stopping the run,” senior linebacker Detric Bing-Dukes said. “The urgency is there to correct it. We know it’s there, and we’re working hard to improve on it. We feel it.”

Sumrall does have some experience to work with in Bing-Dukes, junior Willie Hibler and third-year sophomore Donta Evans. Bing-Dukes has gotten most of the first-team reps in the middle this spring after splitting starts early last season with Evans (17 tackles). Both eventually lost the job to Polk, but Sumrall said the 6-foot-1, 254-pound Bing-Dukes has flashed this spring with instincts that have been honed over a lengthy college career that’s included stops at Georgia and Iowa Western Community College before arriving at Ole Miss two years ago.

“He’s not maybe the tallest or fastest, but when you watch him on video and practice film, you see him do a really good job with his base, his feet, staying square and knowing how to leverage things,” Sumrall said. “A lot of that comes with reps. He’s been playing college football for a while now. He’s got a natural feel for the game.”

Sumrall said Hibbler’s length and history on the offensive side of the ball as a converted tight end have made him one of the better linebackers in coverage, but Sumrall and the rest of the coaches have spent most of the spring getting an extended look at youngsters Josh Clarke, Mohamed Sanogo and Zikerrion Baker, all members of the 2017 signing class. Sanogo played in 11 games last season, mostly on special teams, while Clarke and Baker, who’s repping at outside linebacker, both redshirted.

Learning proper keys and adjusting to different formations are some of the mental aspects of the game that are still a work in progress for all three, but their athleticism has flashed, Sumrall said, with Clarke’s physicality standing out.

“That dude will run and hit and trigger,” Sumrall said of Clarke. “It’s just harnessing and helping him know where to go all the time, what’s his responsibility all the time, what’s his leverage, just teaching him. It’s been exciting to watch him get a little bit better at certain things. That guy’s got some juice about him that’s exciting to see.”

Ole Miss signed four linebackers this year that will join the mix in the fall, and Sumrall will try to further increase the talent level in his first recruiting cycle with the Rebels in 2019. For Sumrall, who spent the last three coaching linebackers and serving as the special teams coordinator at Troy, identifying linebackers that are naturally instinctive is just as important as having the ideal mix of size and speed.

“We’re all hunting measurables,” he said. “Everybody wants long, fast, athletic guys, but at the end of the day, you can be as long, fast and athletic as you want, but if you don’t have any football instincts, it’s really hard to be a good linebacker.”

But Sumrall said he doesn’t have to wait around to add that to Ole Miss’ roster despite what the linebackers have shown on the field in recent years. He’s taking on the onus of tapping into what he believes is an abundance of potential among his group.

“I’ve got to get them where they need to be. That’s my job. I’m pouring everything I’ve got into them to try to get them there as fast as possible, but we’re more than capable. We’ll get them there.”