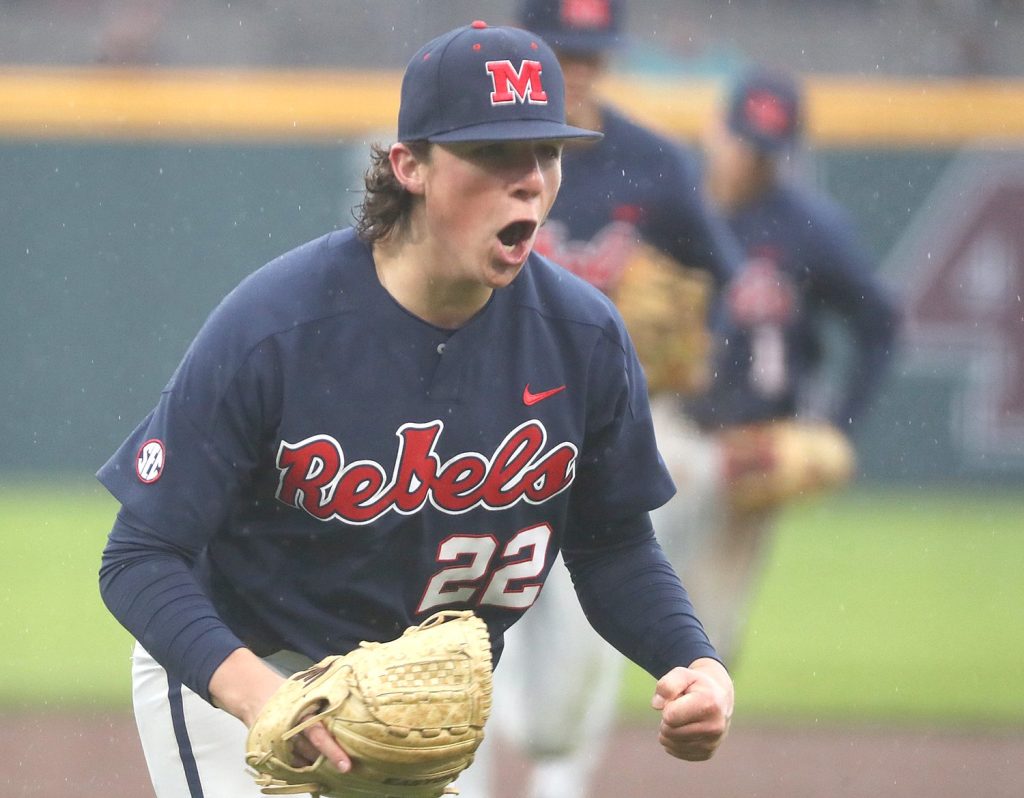 Ole Miss pitcher Ryan Rolison reacts while coming off the field during Game 2 of a series against Mississippi State on Saturday, April 7, 2018, at Dudy Noble Field in Starkville. The Rebels won 6-1 to split the doubleheader. (Joshua McCoy/Ole Miss Athletics)

It ended with the Rebels bouncing back from their worst loss of the season thanks in large part to a bounceback outing from Ryan Rolison.

Rolison gave up just one run for the first time since late February and matched his longest outing of the season to lead No. 3 Ole Miss to a 6-1 win over Mississippi State at Dudy Noble Field. The win, which prevented the Rebels’ first losing streak of the season, came on the heels of a 13-3 loss in the first game of the teams’ doubleheader and snapped Ole Miss’ six-game losing streak to the Bulldogs dating back to 2016.

Ole Miss (27-5, 7-4 SEC) will try to backend a series win for the fourth time this season when the teams conclude the series Sunday at 1 p.m.

“What we’ve been able to do all year long is bounce back after a loss,” Bianco said. “That was our worst, but proud of the way we responded. It starts on the mound, and that’s why Ryan’s outing was so big.”

Rolison (4-3) allowed 14 runs — 10 earned — in his first three SEC starts but kept a Mississippi State team that came in with the league’s worst offense statistically in check despite the Bulldogs (16-16, 3-8) having their chances. MSU went 1-for-12 with runners in scoring position against Rolison and didn’t threaten to cut into Ole Miss’ five-run lead against Will Ethridge, who struck out four in two innings of relief.

Making his first mid-series start of the season as part of Bianco’s decision to reshuffle the rotation this week, Rolison escaped bases-loaded jams in the second and fourth innings and limited MSU to a run in the third after the Bulldogs started their half of the frame with back-to-back doubles. Rolison’s throwing error on Jake Mangum’s bunt put a runner on in the seventh, but the left-hander ended his day by getting Hunter Stovall looking on his 104th pitch three batters later.

“What Ryan has lacked is what you saw here in the few innings where they put some pressure on him and had runners in scoring position, he was able to make some pitches and get off the field without giving up runs and certainly without giving up a big inning,” Bianco said. “The weeks preceding this, he wasn’t able to make that pitch.

“His strike percentage is really high. His stuff is terrific. It’s just a pitch here or there if he makes it or they don’t hit it, some of the games the last few weeks are totally different. Today he was pretty sharp.”

Rolison, who hadn’t pitched beyond the sixth in his two previous starts, scattered six hits, walked two and struck out nine, retiring nine of the final 11 batters he faced with Rolison pinpointing better command of his fastball as the primary reason he was able to settle in. His outing also preserved a bullpen that logged 5 ⅔ innings in the opener.

“I think the best thing for me today was I was able to throw glove-side and get in on some hitters,” Rolison said. “It kind of opened up the plate for me.

“We needed a big start. Not a very good first game. We needed a bounceback, and it just shows a lot about our team. The defense did a great job behind me, and we were able to get a big win today.

Ole Miss finished with 14 hits, nearly tripling its total from the first game, and built a 4-1 lead through the first four frames against MSU’s Ethan Small (2-3) on two-out knocks from Tyler Keenan, Jacob Adams, Ryan Olenek and Nick Fortes. Olenek and Fortes each went 3-for-5 while Chase Cockrell added a pair of doubles and drove in a run.

A win Sunday would also give Ole Miss its first series win over MSU since 2015.