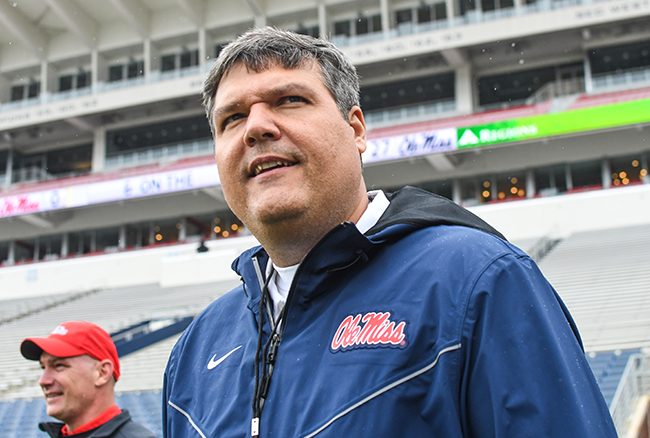 It may change by tomorrow, but no team in the country has more momentum on the recruiting trail than Ole Miss.

Aided by a flurry of recent commitments, the Rebels have the nation’s top-ranked recruiting class in 247Sports.com’s composite rankings, which, according to the website, takes an equal percentage of prospects’ ratings from each major recruiting service and compiles them into a comprehensive algorithm that’s used to generate team rankings.

Ole Miss has 15 players verbally committed for the 2019 class, a number that’s shot up with six commitments in the last 11 days.

With some eight months remaining before December’s early signing period, the biggest reason Ole Miss sits atop the team rankings is quantity. The Rebels have more commitments than anyone in the country — four more than the No. 2-ranked team, Miami — with three of them being four-star prospects. Black and Jackson Prep running back Jerrion Ealy are among the top 70 players in the country, according to 247Sports’ rankings.

It’s going to be difficult for Ole Miss to hold on to the top spot given it’s got more than half of its class put together (given each prospect sticks with his commitment and eventually signs), but it’s impressive work nonetheless from head coach Matt Luke with the program just four months removed from the fallout of a years-long NCAA investigation. It’s hard to imagine the clarity of knowing the final penalties hasn’t helped Luke during his pitch to recruits given that even if Ole Miss loses its appeal of a bowl ban for the 2018 season, next year’s crop of signees won’t be affected by it.

Luke said incumbent Jordan Ta’amu and true freshman Matt Corral were the only quarterbacks taking reps in the spring with Alex Faniel moving to tight end. Luke wasn’t ready to commit to that being a permanent move for Faniel, but the Rebels still need depth at the position with Ta’amu gone after next season, something Tisdale would instantly provide.

Ealy would join a backfield that’s looking for a proven playmaker now that 1,000-yard rusher Jordan Wilkins is out of eligibility. The nation’s fourth-best running back and the No. 70 overall prospect in the 247Sports composite, Ealy could be an immediate-impact candidate should he actually make it to campus. The two-sport standout is a top prospect for the 2019 MLB First-Year Player Draft.

With Ole Miss set to lose five defensive backs after next season, including significant contributors in safeties Zedrick Woods and C.J. Moore and cornerbacks Ken Webster and Javien Hamilton, the Rebels have five committed. That doesn’t include the 6-foot-4, 212-pound Black, who could play safety should he end up on the defensive side of the ball.

Snagging Black and Ealy has helped Ole Miss get off to a better start in Mississippi after whiffing on many of the state’s top prospects during the previous recruiting cycle. The Rebels already have commitments from four of Mississippi’s top 20 prospects (Black, Ealy, Meridian three-star defensive end Jamond Gordon, Tupelo three-star receiver Jordan Jernigan) and two of the top four (Black and Ealy).