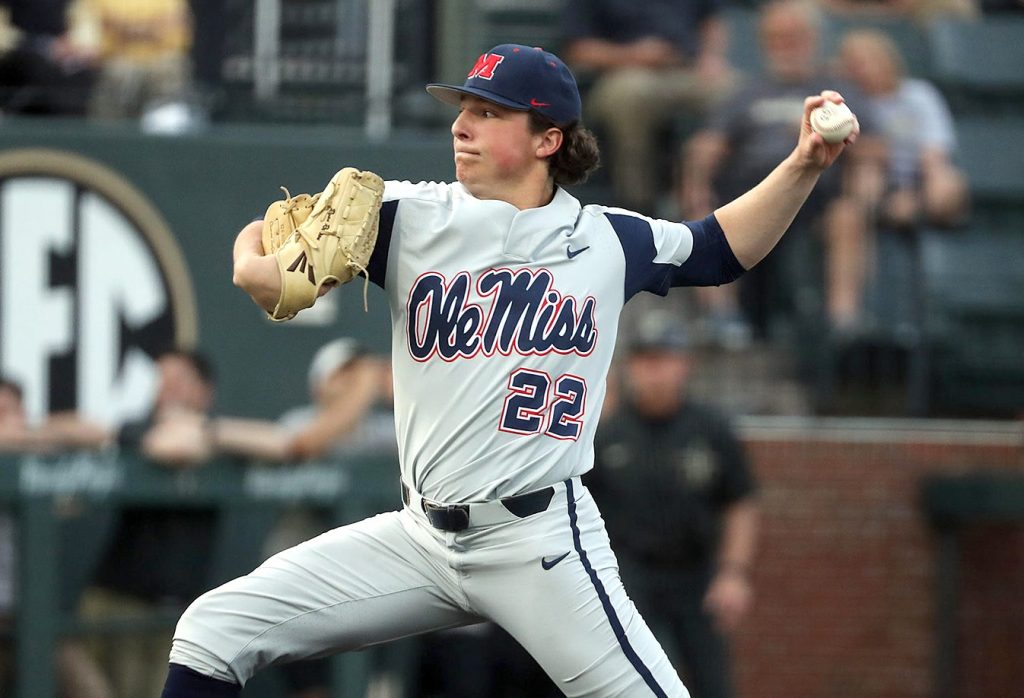 NASHVILLE, Tenn. — Ryan Rolison hasn’t always been as sharp as he’d like this season, particularly when it comes to his fastball command.

It’s something even Major Leaguers have noticed with Ole Miss’ left-hander. One in particular has offered some mechanical tips — from one Rebel to another.

“Drew Pomeranz actually reached out to me and saw a couple things I was doing, throwing across my body a little bit,” Rolison said. “We’ve been in the bullpen working on that. The command’s gotten better.”

A former Ole Miss All-American, Pomeranz was a first-round pick of the Cleveland Indians in 2010. Pomeranz is pitching for his fourth Major League team after being traded to the Boston Red Sox in 2016, though the left-hander is currently on a rehab assignment with the reported possibility of rejoining the Red Sox’s rotation as soon as next week.

A draft-eligible sophomore, Rolison could get his professional career started sooner rather than later but would first like to iron out the one thing that’s kept a solid season from being a dominant one. Not always being able to put his fastball where he wants it, especially in the early innings, has left him susceptible to hard contact (51 hits allowed in 52 ⅓ innings) and more walks (three in four of his last six starts), including three in the first four innings Friday in No. 5 Ole Miss’ 11-3 win over No. 15 Vanderbilt in the series opener.

Rolison, who lowered his earned run average to 3.26 after allowing two runs on six hits Friday, has been able to strand most of those baserunners by racking up an SEC-leading 71 strikeouts, but throwing those extra pitches early to get out of jams has meant rarely sticking around in the later innings.

Rolison has averaged 104 pitches over his last four starts but has only gotten through six innings in one of those. He matched a season-high with 108 pitches Friday over 5 ⅔ frames.

“We talked about it before the season,” Rolison said. “That’s what we struggled with last year was starters going deeper into the game.”

Yet Bianco credited Rolison for being able to use his slider and a changeup that’s still developing to produce swings and misses when he needed them most. He finished with eight punchouts, including back-to-back strikeouts to escape a two-on, one-out jam in the third that preserved a 4-2 lead before the Rebels blew the game open with seven runs over their final four at-bats.

“I think some of it is just overthrowing. Some of it is believing in who you are,” Bianco said. “We’ve worked a lot with that, but (Friday) I thought the three pitches … I thought it was about as complete as he had in a while, especially in conference play.”

Vanderbilt has one of the more unique venues in the country in that Hawkins Field doesn’t have any dirt. The entire playing surface, including the pitcher’s mound, is turf.

It makes for a much faster surface that benefits hitters. A handful of choppers bounced over the head of infielders for hits Friday while a routine line drive to right-center field off the bat of Vanderbilt’s Alonzo Jones in the seventh inning skipped all the way to the wall for a triple.

“This is definitely a hitter’s park,” outfielder Ryan Olenek said. “The turf definitely comes into play regardless whether you want to say it does or not. Just put the ball in play and good things will happen. That’s the same on any field. You’re just trying to play your best baseball regardless of the field you’re playing on, but I think it definitely plays a factor.”

Rolison said he didn’t spend much time thinking about it as a pitcher since both teams have to deal with it.

“You saw it on both sides, a couple of ground balls get through that probably wouldn’t get through on a regular field,” Rolison said. “That’s just part of it.”

It wasn’t a high-leverage situation, but Max Cioffi took the ball for Ole Miss in the ninth and continued what’s quietly been a strong season for the freshman right-hander.

Cioffi retired the Commodores in order and has yet to allow a run in 11 innings. Three of his seven appearances have come in SEC play, where he’s given up just two hits with two strikeouts and three walks in 5 ⅓ innings.