No. 11 Ole Miss finishes doubleheader sweep of No. 23 Georgia to take series 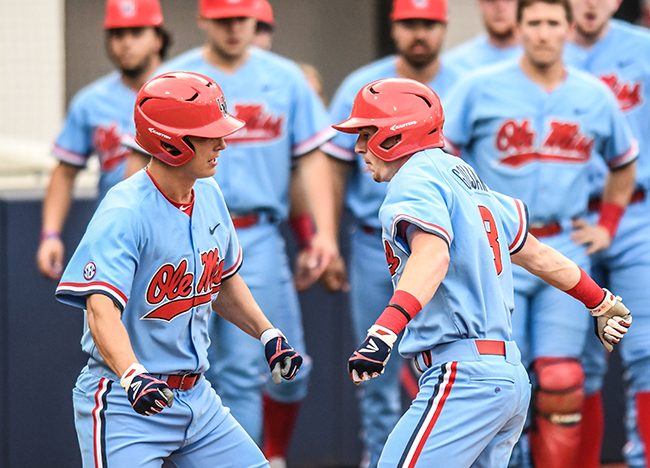 Ole Miss Will Golsan, right, hits a home run and is congratulated by Chase Cockrell against Georgia in Game 2 of a doubleheader at Oxford-University Stadium in Oxford, Miss. on Saturday, April 21, 2018. The Rebels won 5-2 to win the series. (Bruce Newman, Oxford Eagle via AP)

Their efforts helped the Rebels’ early five-run lead stand up as No. 11 Ole Miss swept Saturday’s doubleheader from No. 23 Georgia with a 5-2 win in the nightcap at Oxford-University Stadium. With its first SEC twinbill sweep since 2015, Ole Miss (32-9, 10-8 SEC) back-ended its third league series win of the season.

Ole Miss’ first series win in three weeks also ensures the Rebels of finishing the weekend in a tie atop the SEC’s Western Division standings.

“We knew what we were capable of,” outfielder Will Golsan said. “We weren’t playing our best baseball, and we just had to come out here and play the right way.”

Max Cioffi, Will Ethridge and Parker Caracci combined for three innings of one-run relief, though it wasn’t always easy for the trio after six wildly effective innings from James McArthur, who allowed one run on two hits and struck out four before his season-high sixth walk to start the seventh ended his day.

“(McArthur) was a horse for us today on the mound,” Ole Miss coach Mike Bianco said. “He always has the dominant fastball, but today he had a much better breaking ball and some swing and misses on his breaking ball.”

A wild pitch plated a run for the Bulldogs (27-13, 10-8) in the seventh against Cioffi, who went 1 ⅓ innings in his third straight weekend appearance. Ethridge came on with one out in the eighth and allowed Michael Curry’s RBI groundout, two singles and a walk before Caracci came on with the bases loaded.

Caracci, who allowed the go-ahead run in the Rebels’ series-opening loss Friday, got Meadows to roll over an offspeed pitch to third to wiggle out of the jam before retiring the Bulldogs in order in the ninth for the four-out save. The bullpen combined with McArthur (5-0) to limit Georgia to six hits and allowed two runs in 6 ⅔ innings on the day after coughing up five leads in the Rebels’ last four SEC losses.

“One of the things I said to the team — and it’s true — is don’t wish it was easier. Wish it were better,” Bianco said. “Better as in tougher. Make the plays. That’s what we were doing up until two weeks ago. The last couple of weeks, we just haven’t done enough to get off the field or to make a pitch or to make a play in the field to get us off the field. Today we did.”

Ole Miss also finished with just six hits against four Georgia pitchers but came up with timely ones. Golsan went 3-for-3 with a pair of home runs — a solo shot in the second and a two-run homer to give the Rebels a 5-0 lead in the fifth — to extend his hitting streak to 10 games. Golsan, who finished the day with five RBIs, is hitting .432 over that span.

“I’m trying to stick to my approach,” Golsan said. “I feel like I’ve been swinging it well the whole season but some balls haven’t been falling. Feels good to see them fall.”

Ryan Olenek ran his hitting streak to 19 games with a third-inning single.

18-hour days, temporary housing and a lot of FaceTiming:…