Ole Miss’ right-field terrace will open for LSU series, but students need to ‘control the behavior’ after bullpen incident 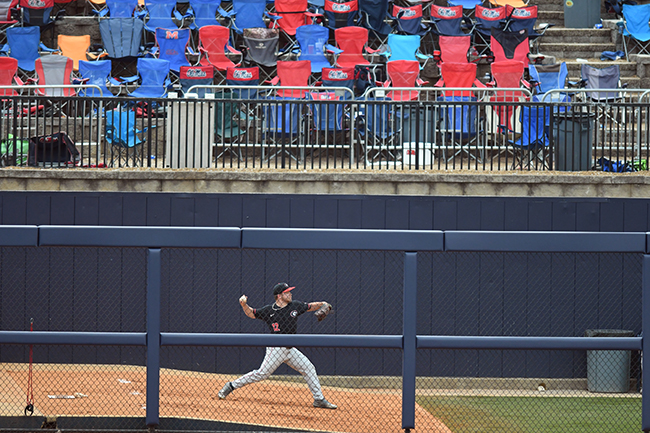 The section above the Georgia bullpen was cleared of students after reports of rocks being thrown into it by Ole Miss students in Game 2 of a doubleheader at Oxford-University Stadium in Oxford, Miss. on Saturday, April 21, 2018. (Bruce Newman, Oxford Eagle via AP)

The right-field terrace above the visitors’ bullpen at Oxford-University Stadium will be open when No. 6 Ole Miss begins its series against LSU on Thursday and will remain that way throughout the weekend.

At least that’s the plan as long as the students sitting there behave themselves better than they did last weekend when Ole Miss’ gameday operations staff cleared out the section during the nightcap of the Rebels’ doubleheader against Georgia on Saturday after multiple students threw rocks into the bullpen, which is located directly below the terrace.

“We can’t have anymore relapses of behavior out there,” Ole Miss athletic director Ross Bjork said. “Otherwise there could be further consequences. We have to continue to provide security out there, educate the students that are out there and make sure we protect the visiting team.”

Bjork said there have been “isolated” incidents involving students seated in the terrace and the visitors’ bullpen since he took over as athletic director in 2012 but nothing that escalated to the point it did Saturday. He said there were some issues during Friday’s series opener and again during the first game Saturday before gameday operations made the decision to clear out the section in the early innings of the series finale after repeated warnings from security personnel were ignored.

“They just couldn’t stop,” said Bjork, who was out of town Saturday to start the school’s annual Rebel Road Trip caravan. “It’s unacceptable. Can’t do it.”

Bjork said there is more security patrolling the outfield seating than there’s been in years past, but the bullpen is open, leaving it susceptible to thrown objects. The idea of covering it with a tarp has not been discussed, he added, because that’s not the primary issue.

“We already do have extra security, but there’s no reason to put a tarp over the bullpen,” Bjork said. “We need to control the behavior. People don’t need to throw things.

“Do the right thing. We want everyone to enjoy the experience and have fun. We have a great atmosphere, but we have to act the right way.”

This is also the last season students in the right-field terrace will hover over the visitors’ bullpen. Ole Miss will move to the first-base dugout and take over the bullpen in right next season since renovations to the park will put the Rebels’ new locker room on that side, moving the visitor’s bullpen to left.

Should any more incidents occur this season, Bjork said both the school and the SEC could get involved to come up with a more permanent solution.

“You could be talking about the entire section (being taken away), not just the area by the bullpen,” Bjork said. “And no one wants that. We don’t want that. No one would want that, but if we don’t control the behavior, then we’ll have issues.”

Ole Miss (32-9, 10-8 SEC) will head to Pearl on Tuesday for the annual Governor’s Cup against Mississippi State before starting the LSU series with a 7 p.m. first pitch Thursday.