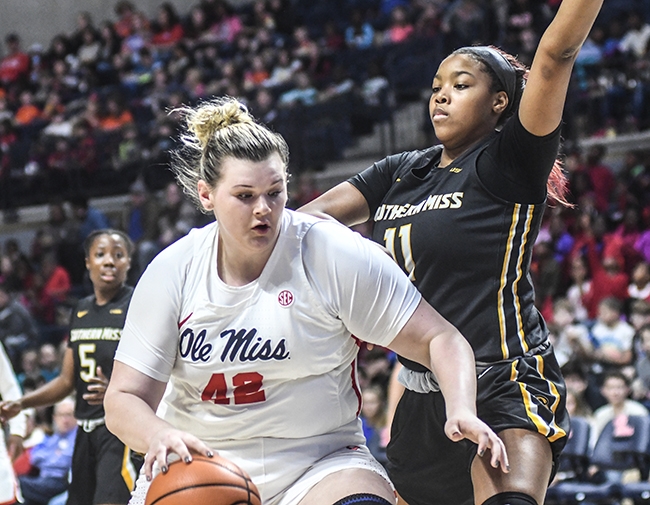 The Ole Miss women’s basketball team will have a new-look coaching staff this fall with first-year head coach Yolett McPhee-MCuin and her staff sitting on the sidelines.

The roster on the court will have a new look to it also.

Shelby Gibson announced her decision to transfer from Ole Miss on Wednesday. The Rebels’ forward/center made the announcement on her Facebook page.

“It has been a long couple of months, and after lots of prayer, and talking it over with my family and my inner circles I have decided to transfer from the University of Mississippi,” Gibson’s statement read. “I want to thank the administration and the coaching staff for giving me this opportunity 2 years ago.”

Gibson went on to say she has not decided where she will transfer to. She was part of the 2016 recruiting class of former head coach Matt Insell. Insell and Ole Miss agreed in March to part ways after five seasons and McCuin was hired last month.

During her two years as a Rebel, Gibson played in 62 games, starting in 22 of them. Last season, she shared playing time with freshman Promise Taylor. Gibson averaged 6.5 points and 3.03 rebounds per game and also recorded 12 career blocks.

Gibson was named the SEC Freshman of the Week two times during the 2016-17 season.

She is the fourth player to leave the program. Pontotoc’s Marlee Hatcher left and signed with Blue Mountain College last month. Kate Rodgers left the program and signed with Troy in April and on Tuesday, Taylor announced her intentions to transfer as well. Madinah Muhammad, the Rebels’ leading scorer last season, is also not listed on the roster of current players.