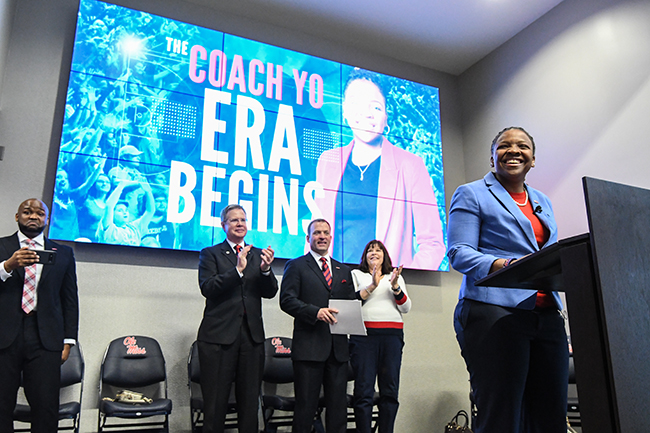 Yolett McPhee-McCuin, right, is introduced to fans as the new Ole Miss women's basketball coach, at the Pavilion at Ole Miss, in Oxford, Miss. on Friday, April 6, 2018. (Bruce Newman, Oxford Eagle via AP)

There was enthusiasm, determination and optimism in Yolett McPhee-McCuin’s voice.

She also sounded like a coach who fully understood what she was inheriting as Ole Miss’ new women’s basketball coach.

“You spend any time with me, you’re going to realize I don’t have any problem rolling up my sleeves,” McPhee-McCuin said. “There’s no job that’s too big or too small. I’m a fierce competitor.”

McPhee-McCuin was formally introduced as the program’s ninth head coach Friday after a month-long search that concluded with her hire two days earlier. Athletic director Ross Bjork said McPhee-McCuin’s name was often mentioned to him by people in the industry as someone he should consider to replace Matt Insell, particularly for the work the 34-year-old did the past five seasons in her first head coaching job at Jacksonville University in turning around a middling program.

“The comeback was, ‘When you do (talk to her), you’ll be blown away.’ And that’s exactly what happened in our process,” Bjork said. “I think it’s her calling. She was born to lead, to teach and to coach.”

In her first public comments since landing the job, McPhee-McCuin, who is on a four-year contract that will pay her $500,000 annually, mixed excitement with the realistic challenges that will come with another rebuild. Ole Miss bottomed out in Insell’s final season, finishing last in the SEC with just one league win during a regular season that ended with the Rebels losing a program-record 13 straight games.

McPhee-McCuin went 94-63 at Jacksonville and finished her tenure leading the Dolphins to three straight 20-win seasons and three consecutive postseason appearances. Jacksonville, which had just two 20-win seasons in its history before McPhee-McCuin arrived in 2013, made its first NCAA Tournament appearance in program history in 2016 by winning its first-ever Atlantic Sun Conference tournament championship.

Now she’s tasked with trying to bring the same kind of rejuvenation to an Ole Miss program that’s finished last in the highly competitive SEC three of the last five seasons and hasn’t played in the NCAA Tournament since 2007, the second-longest drought in a league that sent more than half of its 14 teams to the Big Dance this season.

“I’m going to give you everything that I have,” McPhee-McCuin said. “There is no coach in the country that’s going to outwork me. I truly believe there’s opportunity here to be successful, but it takes work.”

One of those teams is less than 100 miles away at Mississippi State, which has finished as the national runner-up the last two seasons and reached the Sweet 16 before that. McPhee-McCuin said that’s the kind of profile she ultimately envisions for an Ole Miss program that isn’t short on history despite its recent lack of success. Ole Miss has made 17 NCAA Tournament appearances with 10 trips to the Sweet 16 and five Elite Eight appearances.

“The ultimate goal is to make sure that we are known as one of the elite programs in the state,” McPhee-McCuin said. “How are we going to do that? By being better every day and just focusing on our process, our journey and what that looks like for us so that ultimately the goal is not to compete in the state but just nationally.”

McPhee-McCuin said her top priorities are to evaluate the roster she’s inheriting and learn each player’s skill set while also piecing together a coaching staff. Defense, she said, will be an emphasis while she would like her team to “get out and run,” though exactly what style of play the Rebels adopt under McPhee-McCuin will depend on what she feels like best fits her personnel.

McPhee-McCuin said part of that style will be molded from the different stops she’s had in a coaching career that’s spanned nearly two decades. Also the head coach of the Bahamian National Team, McPhee-McCuin was an assistant at Arkansas-Pine Bluff and Portland and had stints as a Power-Five assistant at Pittsburgh and Clemson, where she picked up a line from football coach Dabo Swinney that’s still resonating as she gets to work at Ole Miss.

“One of my good friends, Dabo Swinney, always says, ‘Everything is impossible until you make it happen,’” McPhee-McCuin said. “I’m excited about the challenge.”

Said Bjork, “We have potential, we have history. We have to rejuvenate and re-establish Ole Miss women’s basketball, and Coach Yo is the right person to do that.”