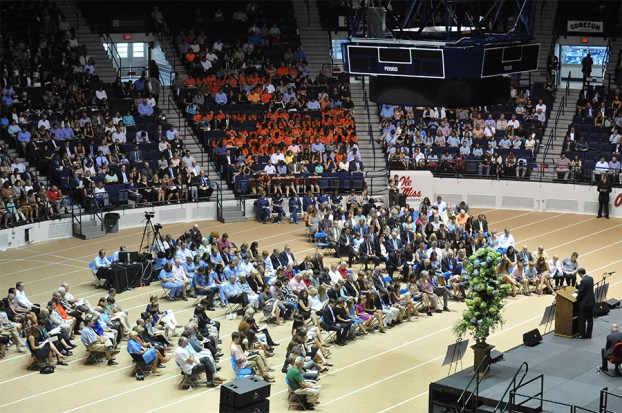 Members of the Farese, Perry, and Poole families, as well as the crowd in the stands, attend a memorial service at the C.M. "Tad" Smith Coliseum in Oxford, Miss. on Saturday, August 20, 2016. The memorial service was held for Dr. Jason Farese and his wife Dr. Lea Farese, Dr. Michael Perry and his wife Kim Perry, and Dr. Austin Poole and his wife Angie Poole, all of who were killed in a plane crash in Tuscaloosa, Ala. on Sunday, August 14, 2016.(Bruce Newman, Oxford Eagle via AP)

The National Transportation Safety Board has released the probable cause of a plane crash that claimed the lives of six Oxford residents in August 2016.

According to the report issued by the NTSB on Thursday, pilot error and a lack of training in emergency procedures with the airplane involved in the accident contributed to the crash.

The report stated there was a total loss of power in both engines “due to fuel starvation as a result of the pilot’s mismanagement of the fuel and his subsequent failure to follow the emergency checklist.”

Drs. Jason Farese and Lea Farese, Dr. Michael and Kim Perry and Dr. Austin and Angie Poole died in the crash. The three couples were returning home to Oxford from Florida where they attended a dental convention.

A flight instructor who previously flew with the pilot stated that Farese, who was piloting the Piper PA-31-325 airplane at the time of the crash, had not received any training in single-engine operations and emergency procedures for that specific aircraft, according to the report.

The aforementioned flight instructor, Charles B. Phillips, pleaded guilty last week to charges that he illegally conducted flights-for-hire and provided flight instruction to Farese without a valid airman’s certificate. Phillips’ airman’s certificate was suspended by the Federal Aviation Administration in 2009 due to unknown medical reasons. His sentencing is scheduled for August.

According to a flight log found in the airplane, Farese had logged 48.7 hours of flight time in the plane since March 2016.

The airplane was manufactured in 1984 and issued an airworthiness certificate in 1998, according to FAA records.

The NTSB report states that the plane was “topped off” with 134 gallons of fuel before departing from Kissimmee Gateway Airport in Florida around 8:55 a.m. Eastern time on Aug. 14, 2016.

Around 11:11 a.m. Farese reported the failure of a fuel pump and requested a diversion to the nearest airport.

When the airplane was approximately 10 miles from the Tuscaloosa Regional Airport, the pilot reported that the airplane lost “the other fuel pump.”

The airplane continued to descend until it impacted trees approximately 1,650 feet prior to the approach end of runway 30 at about 11:20 a.m., landing in Northport, Alabama.

The airplane was equipped with four fuel tanks, comprising an outboard and an inboard fuel tank in each wing. The left and right engine fuel selector valves and corresponding fuel selector handles were found in the outboard tank positions after the crash.

Given the airplane’s fuel state upon departure and a review of fuel consumption notes in the flight log from the day of the accident by the NTSB, the airplane’s outboard tanks contained sufficient fuel for about 1 hour and 45 minutes of flight. The timing corresponds to Farese’s first report of a fuel pump anomaly to air traffic control.

According to the pilot’s operating handbook, after reaching cruise flight, fuel should be consumed from the outboard tanks before switching to the inboard tanks. Two fuel quantity gauges were located in the cockpit overhead switch panel to help identify when the pilot should return the fuel selectors from the outboard fuel tanks to the inboard fuel tanks.

“It is likely that the pilot failed to return the fuel selectors from the outboard to the inboard tank positions once the outboard tanks were exhausted of fuel; however, the pilot misdiagnosed the situation as a fuel pump anomaly,” the report states.

Phillips stated in the report that switching from the outboard to inboard tanks was their normal practice during flight lessons.

Post-accident examination of the airframe and engines revealed no preimpact failures or malfunctions that would have precluded normal operation.

According to FAA records, Farese held a private pilot certificate with ratings for airplane single-engine land, multiengine land and instrument airplane. His most recent third-class medical certificate was issued in August 2014.

The Lafayette-Oxford-University community responded immediately after the crash, showing an outpouring of love, support and grief. Businesses hung black and white signs that read “Oxford Mourns.” A similar logo replaced hundreds of Facebook profile pictures. A community prayer vigil was held the day after the crash in the Grove. Thousands later attended a community memorial service at the Tad Smith Coliseum on the campus of the University of Mississippi.

To view the factual report related to the crash, click here.

Four local students are preparing to leave home for a new journey at the Mississippi School of Mathematics and Science.... read more